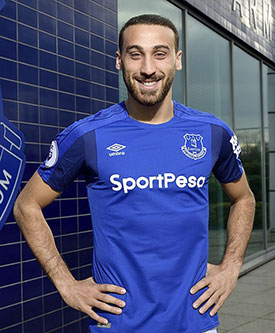 Cenk Tosun is a Blue at last but will he start?
Tony McArdle/Everton FC/Getty Images

Updated Everton get back to the bread and butter of the Premier League this weekend with their season essentially over bar the goal of a top-seven finish and the relative intrigue of whether Sam Allardyce can evolve beyond his limited reputation.

The fact that the first game after the elimination from the FA Cup at the first time of asking will be at Wembley is a mildly bitter twist of fate just as the distance at which the Blues continue to lag behind their one-time peers, Tottenham, won't be lost on the travelling Evertonians.

While the cup offered one last shot at success in what has been a pretty miserable season, the fact that another date under the arch is off the table really will sharpen the focus on the manager, particularly now that he has landed his top priority for January — a striker to ease the burden on Dominic Calvert-Lewin.

Cenk Tosun wasn't signed in time to face Liverpool last Friday but with a week to settle into his new surroundings, get familiar with his team-mates and hone his fitness again, he could be in contention for a starting berth rather than a place on the bench as would have been likely at Anfield.

Whether the addition of a more rounded and experienced striker proves to be the tonic to transform a side that has, frankly, been pretty abysmal going forward since the 3-1 win over Swansea almost a month ago remains to be seen.

Much will depend on the formation and personnel deployed behind him and whether Allardyce opts for the overtly defensive posture he adopted at Bournemouth when he played three defensive midfielders and a lone striker.

Wayne Rooney came off the bench that day in place of James McCarthy but couldn't inspire Everton to victory and his removal from the fray against Liverpool last week following a worryingly ineffective and indisciplined performance doesn't bode well for his chances of leading a newly dynamic Blues side now that Tosun will be leading the line.

Instead, the incisiveness came from Gylfi Sigurdsson who scored the equaliser that threatened to force a replace and the badly-needed creativity came from Ademola Lookman. The young winger, criminally overlooked at West Brom and Bournemouth — they were two games that were begging for him to come on in the final quarter of an hour to inject some direct running and inventiveness — made a strong case for his inclusion in the squad at Wembley but the strength of the opposition might make Allardyce think twice about starting him.

That honour will likely go to Yannick Bolasie again while the number of more defensively-minded central midfielders that end up in the line-up could depend on the fitness of Idrissa Gueye. The Senegalese international was risked at Bournemouth, aggravated a hamstring injury, has missed the last two matches and is therefore probably still doubtful.

Leighton Baines remains sidelined with a calf problem while, on the other side of defence, Seamus Coleman's rehabilitation continues with, perhaps, the end of the month as a target for his return. Michael Keane is also ruled out as he continues to have problems with a gashed foot.

Cuco Martina and Jonjoe Kenny will continue to deputise, leaving Allardyce just needing to perm two from Phil Jagielka, Mason Holgate and Ashley Williams, assuming he doesn't go for five at the back instead.

Spurs, who begin the weekend in fifth place, were held at Wembley by West Ham in their last League outing but had, prior to that, looked like they had finally got to grips with their temporary home with strong consecutive wins over Southampton, Brighton and Stoke City in the League and Apoel Nicosia in the Champions League.

They have shown themselves to be susceptible to teams that go at them on their home turf, something Everton haven't really done at any point this season under three different managers but Blues will be looking to see if Allardyce can maintain his side's defensive solidity against a very strong attacking team while starting to add some adventure going forward in his own team.