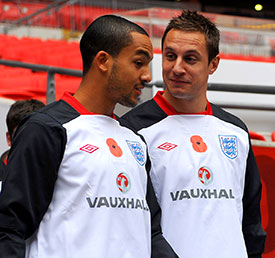 Phil Jagielka has welcomed the acquisition of his former England team-mate Theo Walcott, saying that the ex-Gunner can add pace and goals to an Everton side that has been short on both this season.

Walcott arrived from Arsenal in this week when he signed a three-and-a-half-year contract as part of a £20m move, the second deal concluded by the Blues this month following the transfer of Cenk Tosun from Besiktas.

“He'll bring experience, quality, pace and goals,” Jagielka said on evertonfc.com. “I've played with him a lot for England and he's definitely a match-winner — he can change games. I've played against him, too, and he's a difficult opponent.


“For us, it's about giving our opponents as many little headaches as possible. Theo is fast but also clever; he times his runs well and he ends up in the right place at the right time.

“It's not nice to play against and it keeps you on your toes as a defender but thankfully it's not my problem any more, other than in training!”

Though he hasn't started a Premier League game since April of last year, Walcott has featured for Arsenal in cup competition this season and is expected to go straight into the team for tomorrow's clash with West Bromwich Albion at Goodison Park.

Sam Allardyce's men haven't scored on home turf for a month but with both Tosun and Walcott set for home debuts, the hope is that will change.

“We're excited to get him in and he can bring us a bit more of an attacking threat and it's nice we've bolstered our attacking options again,” Jagielka continued.

“We've got a couple of wingers already here, a couple of strikers, and Theo can obviously play in both of those positions.

“The type of player Theo is and the type of person he is, he's got high standards and he'll want to come here and perform straight away.

“The good thing is he's fit, so we can get him here, get him on the training pitch, get our team together and have a good crack and see how many points we can get in the final months of the season.”


Colin Glassar
1 Posted 19/01/2018 at 00:36:03
Does this mean that Niasse and Lennon will finally move?
Si Cooper
2 Posted 19/01/2018 at 01:22:43
Colin, are there any talks underway? The rumour mill seems to have broken down lately, in what many of us thought would be a particularly busy period as the club demonstrated its displeasure over the performances that have been universally slated.
Mike Gaynes
3 Posted 19/01/2018 at 01:27:38
Jagielka is just happy he won't have to run 90 yards down the wing anymore, as at Anfield. Theo takes over his attacking role from now on.
Derek Knox
4 Posted 19/01/2018 at 02:51:35
Just the goals will do for starters on Saturday; West Brom will be geed up a bit having won a game recently; I remember the last time they came to us, parked the bus, in a very dour game.

At least we have a couple of goalscorers this time; would be good for them both to register their accounts.

While I am happy we have got these two on board; it makes one end of the pitch more accessible; it also reminds you when you see Schneiderlin and Martina on the projected team, how light we still are.

Jim Bennings
5 Posted 19/01/2018 at 11:34:52
It will be interesting to see someone consistently get near the opponents' penalty area rather than standing on the halfway line every game a la Gueye, Schneiderlin, Davies and whoever our supposed wingers have been!!
Anthony Hawkins
6 Posted 19/01/2018 at 13:46:44
I fully expect Walcott to start on the wing in a three-man attack.
David Pearl
7 Posted 19/01/2018 at 15:08:37
Walcott is the best signing we've made in years. He will make a difference. Hopefully we will be really really boring and win 3-0. Jagielka hat-trick!
Gio Mero
8 Posted 19/01/2018 at 16:43:30
Did I just read Big Sam saying we are done with the buying in this window and all we need to do now is offload some surplus? Am I missing something?
Jason Saggers
9 Posted 19/01/2018 at 16:56:16
Gio (8), my thoughts exactly, our managers all seem to have restricted vision, blind to certain obvious areas of concern.

That said, Allardyce has often wheeled and dealed on the last day of the January window. There has to be a left-back in Europe that can do a better job than Martina.

I would rather see Kenny Sansom given his spot. 12 days, 5 hours to finalise a deal for Vardy and get a left-back... lol.

Jackie Barry
12 Posted 19/01/2018 at 17:14:27
Good deal for both parties, Lennon leaving; he will get regular football and the likes of Lookman and Vlasic will get more involved, hopefully.
Gerry Quinn
13 Posted 19/01/2018 at 17:15:42
Always liked the effort that Aaron put in every game – wishing him all the very best as he continues to get his life back on track.
Ian Bennett
14 Posted 19/01/2018 at 17:22:23
Lennon's moving to a good club and manager. Not my favourite, but glad he's bounced back after a tough time. The football community gave him great support.

On a side to think we had "Lennon and McCarthy", and the midfield still couldn't play a tune. Just like the 90s when we had "Holmes and Watson", and still not a clue. I'll get my coat.

Please tell me I have nothing to worry about and we will run out easy winners, and for a change we will enjoy a Saturday night and look forward to watching again on MotD.

But don't worry – the fans all believe in them, which should see us to a comfortable win with both new boys and Martina scoring.

Stephen Jones
19 Posted 21/01/2018 at 22:47:22
Let's hope that Theo's enthusiasm and his skills honed by several years with Arsenal aren't quickly eroded after playing a few games in this car crash of an Everton team!