Garbutt is registered to play 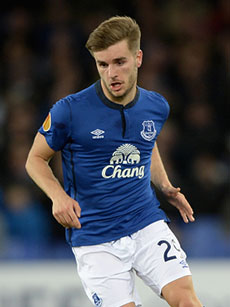 Updated Everton could ensure that Luke Garbutt is eligible to provide cover for the injured Leighton Baines by officially adding him to the squad for the remainder of the season.

The fullback was left off the Blues' list of registered players following the closure of the last transfer window at the end of August but his was added this month under Premier League rules for the January transfer window.

His challenge, however, is to convince Sam Allardyce that he is worthy of inclusion in the 25-man squad that must be submitted to the League once the deadline has passed.

Garbutt looked at one stage to be a natural successor to Baines when he broke into the first team under Roberto Martinez in 2014-15. He deputised for the first-choice left-back at times during that season, acquitting himself well in some key games, including in the Europa League.

Facing further competition from the likes of Brendan Galloway, Garbutt was sent out on loan to gain more first-team experience but found it difficult replicating his form for the Blues during spells at Fulham and Wigan Athletic.

Ronald Koeman overlooked him at the start of this season, despite there being no cover for Baines in the squad, but he has been training with the first team this week and was watched last night as he turned out for the Under-23s in a 3-0 win over Portsmouth.

The left-back position, being filled currently by right-back Cuco Martina as Baines battles a calf problem, has been cited as a problem area by new manager Allardyce but he has complained at the difficulty of finding someone in the transfer market who could fill the role this month.

“I can't speak highly enough of him,” U23s boss David Unsworth said of Garbutt. "He's been with us for six months now, he's acquitted himself really well in training, he's fitter now, we've done so much work on his defensive side.

“We all know his quality in the final third and from a dead-ball situation — that's there for everyone to see.

"[I]t's great he's up with the first-team now. It's up to him to take that opportunity as and when it arises.”