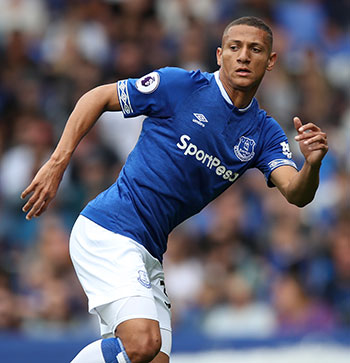 The Brazilian scored either side of Seamus Coleman's crisp strike as the Blues shrugged off an equaliser from the visitors off a corner to record their third successive home victory.

Marco Silva named an unchanged team from the one that started at Old Trafford last Sunday and Everton began on the front foot, carving out a gilt-edged chance for Gylfi Sigurdsson after just five minutes.

Michael Keane slid a brilliant ball in for Coleman who picked the Icelandic international with a perfect cut-back but Sigurdsson scuffed his shot which bobbled wide of the target.

Five minutes later, Sigurdsson popped up in the box again to meet a low cross from Lucas Digne on the opposite flank but he could only stab wide as the covering defender slid in to tackle.

Kurt Zouma then dropped a header wide from a set-piece at one end before a Brighton corner at the other led to Everton breaking away and taking the lead with a lovely counter-attacking move in the 26th minute.

Sigurdsson surged away from his penalty area down the left flank, picked up a return pass from Bernard and then slipped a ball between two defenders for Richarlison who smashed a first-time shot over Mat Ryan's head.

The hosts' lead would last just seven minutes, however, and it was their familiar weakness at corners that reared its head for the equaliser. Brighton played the set-piece short, the cross was swung in uncontested and Lewis Dunk stole in behind Zouma and ahead of Sigurdsson to head home.

No doubt spurred on by their manager's half-time team talk, Everton came out recharged in the second half and came within inches of retaking the lead just three minutes in.

Idrissa Gueye drilled a left-foot shot off the base of the post from the edge of the box, Bernard fizzed the rebound back across goal but Walcott sliced his finish into the stands at the back post.

It only took a couple more minutes before the Blues' dominance told, though, after André Gomes did well to hold off his man and the ball broke to Coleman a yard or so outside the area. The Irishman picked his spot with a sweet finish through a crowd of players and inside the far post to make it 2-1.

It was 3-1 with 13 minutes ago with another piece of brilliance from Richarlison. The Brazilian seized upon a wayward cross-field pass by Dunk, impudently knocked the ball past the flat-footed Duffy, rounded the goalkeeper expertly and tucked the ball into the empty net.

Alireza Jahanbakhsh tested Jordan Pickford with a late chance but the England man was equal to his curling shot, pushing it over the post but Brighton were well beaten by that stage.

The result keeps Everton in 9th place but moves them back to within two points of the top six ahead of a difficult assignment at Chelsea next weekend.