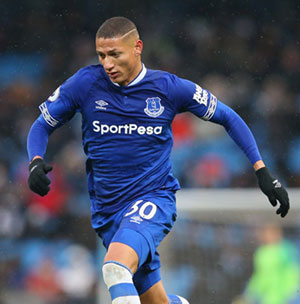 Everton recovered from a shambolic first-half to put in a stirring display after the break and record their first win over a "big six" side in over two years.

Richarlison and Gylfi Sigurdsson each notched their 12th Premier League goals of the season as Marco Silva's half-time team talk appeared to have the right effect on a team that had looked likely to be steamrollered based on the pattern of the first 45 minutes.

Looking to close the gap to Tottenham in third, Chelsea could have been out of sight by half-time but a combination of excellent goalkeeping by Jordan Pickford, the woodwork, and poor finishing by the visitors ensured that the contest was goalless at the halfway stage.

Pickford denied Eden Hazard his first goal at Goodison Park with a smart one-handed save at his near post early on and was almost beaten by the Belgian in the seventh minutes but was relieved to see the ball come back off the post as Chelsea swarmed their hosts in the opening 10 minutes.

Jorginho and Ross Barkley had a shots saved in routine fashion, Gonzalo Higuain stabbed one over and Pedro put two efforts wide as Maurizio Sarri's men tried to turn the screw but the Blues' defence held while only André Gomes had tested Kepa in the Chelsea goal after Dominic Calvert-Lewin had put two strikes over the bar and into the Park End.

Everton came out from the interval with immediate intensity and purpose, however, and after Calvert-Lewin had come within inches of finding Bernard with a great ball behind the defence, another accurate Gomes needed strong hands from Kepa to parry the ball behind.

While that corner came to nothing, it was from another one two minutes later that the Toffees took the lead in the 49th minute. Calvert-Lewin capitalised on weak marking by David Luiz to head goal-wards and while his effort was saved on. the line, Richarlison was alert to head the rebound home from close range.

Another terrific save from Pickford to foil Higuain's impressive 25-yard shot preserved the Blues' lead and after Richarlison had gone close with a miscued with a volley, the Brazilian was felled in the box to earn a penalty with 18 minutes to go.

Attempting to drive across Alonso to engineer space for a shot, Richarlison was caught on the foot by the Spaniard, referee Anthony Taylor pointed to the spot and Sigurdsson stepped up to try and double the lead.

The Icelandic midfielder's spot-kick was poorly placed but Kepa could only block it straight back to him leaving an open side of the goal for Sigurdsson to stroke home.

Theo Walcott came on for the hard-working Bernard for the closing stages and went close to making it 3-0 but his attempt to slide the ball under the keeper was saved while Hudson-Odoi's powerful drive was parried over by Pickford and Olivier Giroud's stoppage-time header bounced off Cesar Aspilicueta as Chelsea's limited efforts to salvage a point came to nothing.

The result is a welcome boon to Silva who, along with his players, came in for deserved flack for the capitulation at Newcastle last weekend.

It was Everton's first win over a top-six club since January 2017 when Ronald Koeman's team mauled Manchester City 4-0 and the result keeps alive hopes that Silva could yet engineer a seventh-place finish.