Gomes out of Blades clash 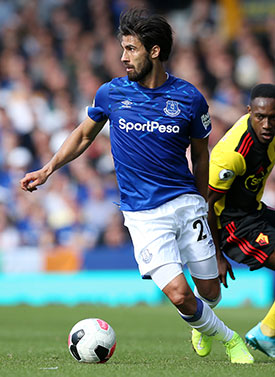 Everton will be without André Gomes for a second game after Marco Silva confirmed that the midfielder is ruled out of tomorrow's meeting with Sheffield United through injury.

Gomes is battling an unspecified rib problem sustained in the last home game against Wolverhampton Wanderers a fortnight ago and he missed the defeat at Bournemouth last Sunday with the complaint.

There were rumours on social media that the Portuguese had fractured one of his ribs but this remains unconfirmed and thus Silva hasn't been specific on the nature of the injury, except to say that it isn't a long-term issue.

Asked if Gomes would be fit to face the Blades this weekend, Silva said: “No. André Gomes is out and JP [Gbamin] is out as well.

“In two or three days I might be able to give you more information.”

Jean-Philippe Gbamin, meanwhile, is continuing his rehabilitation after he suffered what the club described as a serious thigh injury last month.

The new signing from Mainz had made just two appearances for the Blues before picking up the injury in training and is not expected back until November.


Jim Bennings
1 Posted 20/09/2019 at 20:50:34
People wondered why we wanted Doucoure on deadline day stating that we already have too many midfielders.

Well there’s already been a major injury crisis and we aren’t even in autumn yet.

John Reynolds
2 Posted 20/09/2019 at 21:01:14
I really hope Silva gives Tom a start tomorrow.
Karl Jones
3 Posted 20/09/2019 at 21:10:20
Tom Davies must surely be given a chance. You can't be playing two defensive midfielders at home, it never works and invites pressure. Schneiderlin must surely be dropped. He always looks like there's a stupid mistake about to happen. His heart just doesn't seem to be at Everton.
Martin Berry
4 Posted 20/09/2019 at 23:40:15
I just can't see Schneiderlin being dropped as he is the cover for the defence and Marco does not see Tom Davies in that role, so I wonder when he will get on.

Does Marco trust Tom? I am not sure, but I think the young man is a real talent and I will be disappointed if he purely has a bit role in the coming season.