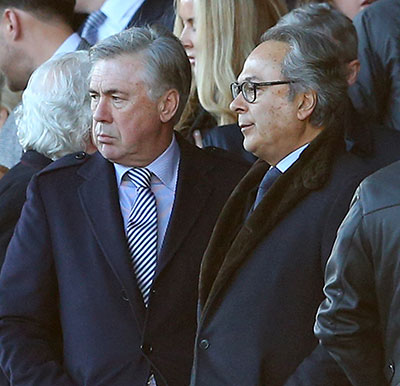 Everton and Arsenal battled out 90 minutes of poor-quality fare in front of their respective new managers who were watching on from the stands.

With Carlo Ancelotti's arrival as Marco Silva's long-term successor confirmed before kick-off, Duncan Ferguson was in the dugout for his final match as caretaker manager and he would pick up his fifth point from a possible nine in the Premier League despite the Blues failing to register a shot on target for the first time in almost two years.

The Scot had goalkeeper Jordan Pickford to thank for a brilliant point-blank stop early in the second half while his charges, many of them fatigued from playing their third match in less than six days, toiled to successfully contain the Gunners but at the expense of genuine attacking openings of their own.

Ferguson was boosted by the availability of Lucas Digne, Gylfi Sigurdsson, Fabian Delph and Djibril Sidibé, all of whom came into the side following illness or injury but they were unable to inspire victory against a side that has also been struggling for form this season.

The Blues displayed the energy and determination that has been a feature of Ferguson's interim tenure and they had the better of the first half despite not carving out many clear-cut opportunities against a young Arsenal side.

Digne wasted a couple of early corners before Alex Iwobi was forced off with a hamstring injury to be replaced by Cenk Tosun but the Turk would have just one wild effort shortly after his introduction that went high and well wide.

Sigurdsson curled a free-kick into the side-netting and Tom Davies struck a cross from a promising position into Tosun's body while Arsenal, with their new boss, Mikel Arteta in the Main Stand, registered their only meaningful attempt at goal a minute before the break when Gabriel Martinelli hammered wide when well-placed.

There were no further changes at the break and Everton went as close as they would come to scoring when Richarlison fizzed the ball across the face of goal and a couple of feet wide of the far post.

The visitors, meanwhile, threatened at the other end when Yerry Mina's excellent slide tackle handed them a corner that was flicked on by Emile Smith Rowe where Pierre-Emerick Aubameyang arrived but his seemingly goal-bound shot was batted away superbly by Pickford.

Sigurdsson and Dominic Calvert-Lewin would both see shots blocked for the hosts while Aubameyang shot tamely at the keeper before Tosun was withdrawn in favour of Moise Kean, much to the former's chagrin, with 18 minutes to go.

Davies dragged a late effort wide as the last mildly interesting moment of a largely dreadful encounter that petered out to a goalless conclusion.