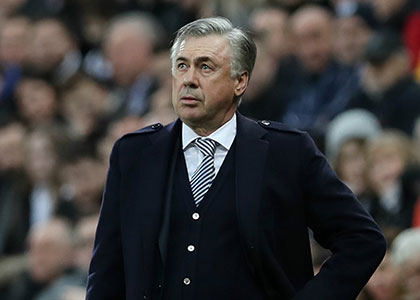 Carlo Ancelotti has denied reports of dressing-room tension following Sunday's humiliating defeat to Liverpool in the FA Cup and he stressed the need for the fans' support at Goodison Park tomorrow.

The manager says that the team have analysed what went wrong at Anfield, have worked well on the training ground this week and they are now looking forwards.

“Of course we were not happy, we are all disappointed and I explained to the players my [thoughts] on the game,” Ancelotti said when asked about the aftermath of the cup tie during his pre-match press conference ahead of the visit of Brighton.

“Of course, we have to look forward. I understand the frustrations of the supporters as this is normal when you lose a derby but tomorrow I hope the atmosphere in the stadium will be good because I think we need the support.

“And we need a great performance tomorrow to react well after the defeat and that's it — there was no argument on the training ground or in the dressing room. We just analysed the situation and the mistakes that we made against Liverpool. Full stop."

Ancelotti was asked by Sky Sports's Vinny O'Connor about suggestions made in the media that some of the senior players had objected to criticism of their performance at Anfield.

The Italian flatly rejected the insinuation, however, saying: “No, absolutely not. There was no criticising. The players listened, they were [in agreement] over the mistakes that we made and the fact that we were unable to play a good game.

“But there was no argument, no discussion. We have worked well this week. We've had time to work and I hope that tomorrow we will have a good performance and try, most importantly, to win.”

Ancelotti confirmed that he and other club officials had had a discussion with Fabian Delph over his interaction with a supporter over Instagram, screenshots of which were shared on social media and then reported in the national press.

Delph was advised that it was a mistake, particularly at a time when emotions were running high but Ancelotti returned once more to the theme of sticking together and moving forward, expressing confidence that the Blues could use the next few matches as a springboard to launch higher up the table.


Veselin Petrov
1 Posted 10/01/2020 at 19:54:34
I think it was expected Carlo denied any post game disruption. Even if there was one, it usually stays within the changing room anyway.

I also feel his positive messages from the presser today were a right choice. We need to move on eventually.

As for Gomes, wonderful news he seems to be progressing faster than initially expected.

We have to hope that Carlo 'explaining his thoughts on the game at Anfield to the players' involved a serious stare and a Marlon Brando promise.

To professionals in the game, whilst it's not run of the mill, it's also just another loss. Just like a bad dinner service in a restaurant, or a bad day on site.
You go back to work and try to fix the problems.