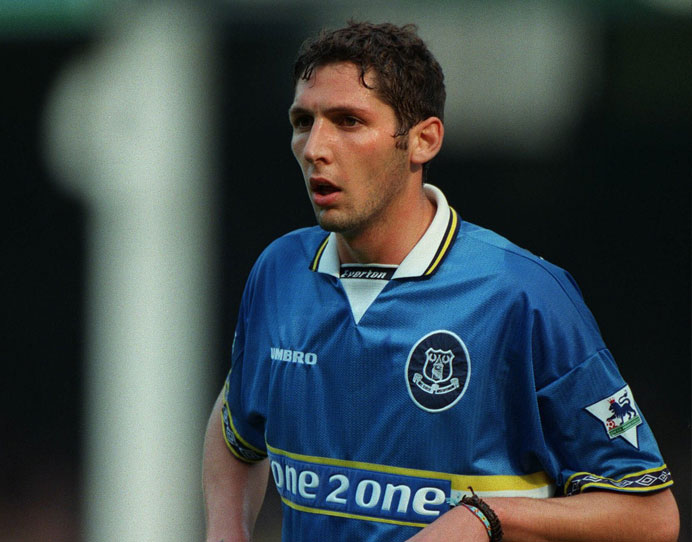 Signed alongside the likes of Olivier Dacourt, John Collins and Ibrahima Bakayko in 1998, Marco Materazzi was an illustration of the cosmopolitan and dynamic side that Walter Smith was trying to assemble in his first season at Everton. The tall, rangey Italian was unlike anything Everton had seen before at centre-back but he was a mobile, aggressive and elegant player who provided a threat from set-pieces and should have suited English football but he was sold back to Italy after failing to settle in the North West.

Ultimately, Materazzi needed more than the one season he spent on Merseyside to adapt to the English game. Terrific in possession, he was in many ways ahead of his time for a League that would one day boast some of the finest ball-playing centre-halves in the world. He was also a little clumsy at times and amassed an inordinate amount of bookings and red cards which sullied an otherwise promising debut season in the Premiership.

Materazzi became the first Italian to play for Everton when he was signed from Perugia for £2.8m.

"He is someone I watched play a few times when I went to watch Marco Negri, who I signed for Rangers," Smith said at the time. "He always impressed me with the way he played.

"Perugia were keener to sell the player abroad than to one of their rivals and we managed to get him. I'm delighted about that.  He's a good defender, aggressive, good in the air, good on the ground and he can pass the ball.  He was a player who caught my eye and I think he will handle the Premiership, no problem.

Materazzi took a while to get going at Everton, looking slow on the turn in his early appearances but once he got into his stride his long legs gave him fair pace. As the season progressed, reports soon began to improve.  In no time, Marco was being heralded as a great find by Smith. His calm composure in controlling the ball and bringing it out of defence was a revelation at the time.

Sadly, murmurings of unrest surrounded "Mazza" as his first season in England came to a close. Citing personal reasons and his wife's inability to settle on Merseyside (she was quoted as saying she was scared to go outside), Everton realised a small profit by selling him back to Perugia for £3m in the summer of 1999.

For Everton to lose a key player of his all-round ability and confidence at such a young age was a huge disappointment and it was a sign of what was to come in terms of the manager having to pare off his most saleable assets to service the debts that Chairman Peter Johnson had rung up buying players in the first place.

Materazzi, himself, would go on to have a stellar career at Inter Milan where he won five domestic titles, four Coppa Italia medals and the Uefa Champions League. He was also central to Italy's triumph at the 2006 World Cup where the defender would make international headlines in the Final. Marco had already given away a penalty against France when he scored the equaliser to bring the Italians level and it was his needling of Zinedine Zidane that provoked the infamous headbutt that saw the French icon sent off in extra-time. The Final went to penalties, Materazzi netted one of the spot kicks himself and Italy lifted the World Cup for the fourth time in history.