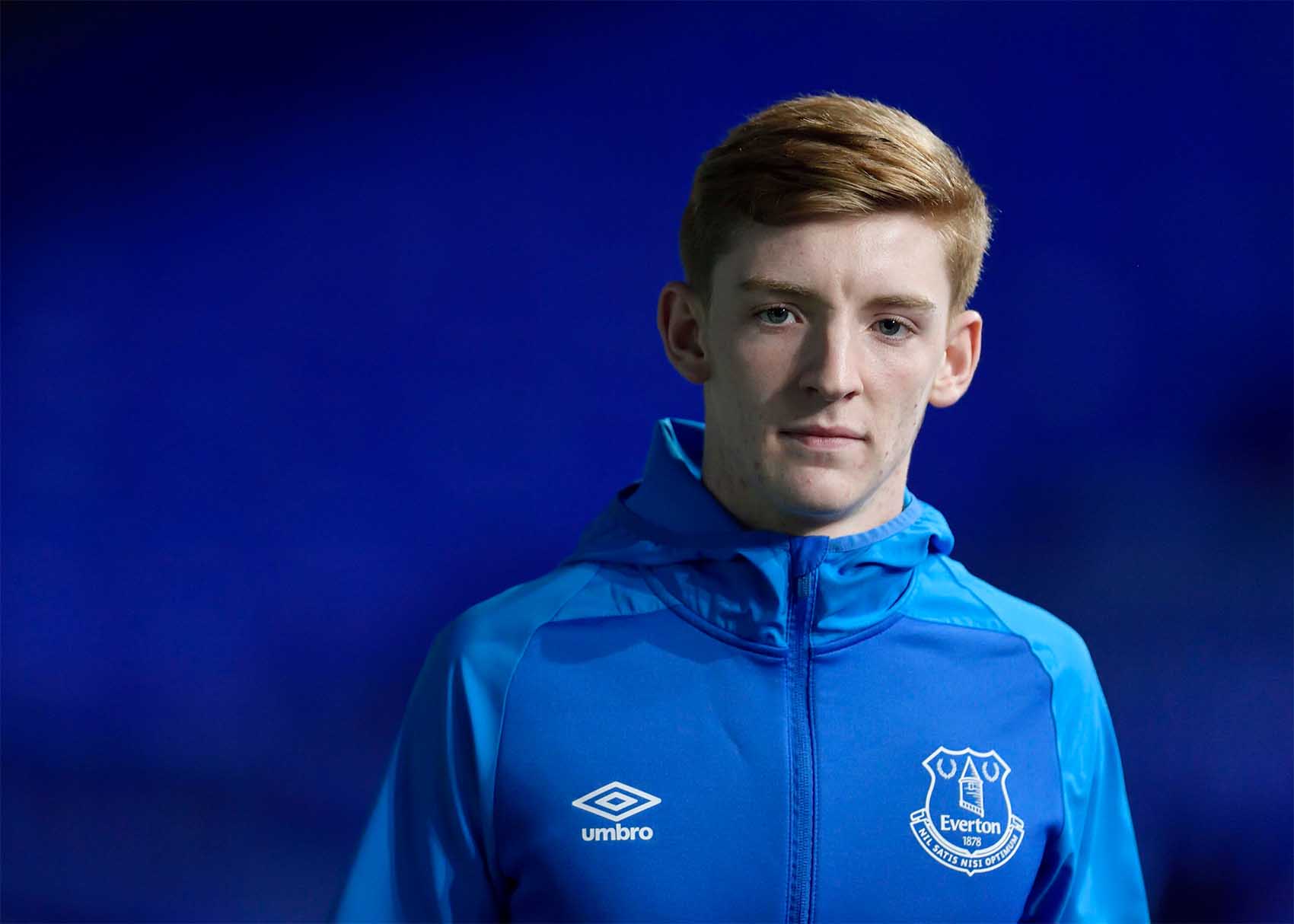 An attacking midfielder who includes dribbling and finishing among his strengths, Anthony Gordon joined Everton Academy Under-12s as an 11-year-old after being spotted playing for his local team, Frameline Juniors FC.

He went on  an impressive goalscoring run for Everton's Under-18s in the opening few months of the 2017-18 season that brought him to the attention of the senior team management and he became the first player to be born in the 21st Century to play for Everton's first team when, aged 16 years, 286 days, Gordon came on as a substitute in the Europa League group stage dead rubber against Apollon Limassol in Cyprus in December 2017.

It made him the sixth youngest player to ever play for Everton's first team and he continued his goalscoring at U18 level but, as the season progressed, a niggling knee problem required surgery in March 2018 that ended his season early and his recovery from this would affect his availability the following season.

Gordon had to reacclimatise in both the U18s and U23s after that, being named more times as a substitute for the latter team as he made the transition. With rumours of interest from Arsenal and the Bundesliga, Everton made sure of the youngster's future at the club by presenting him with a 4-year professional contract, signed in March 2019.

He continued to dazzle for the second string, scoring some impressive goals and providing assists for team-mates, helping the U23s win Premier League 2 and the Premier League Cup in 2018-19. The following season was another good one for the Scouser who was now getting onto the bench for a handful of senior Premier League games before coming on as sub against West Ham and Chelsea under new boss Carlo Ancelotti until the 2019-20 campaign was halted by the Coronavirus pandemic.

At the restart in June 2020, Gordon was handed his first Premier League start in the delayed Goodison derby and he would be used intermittently by Ancelotti who provided the youngster with opportunities to gain valuable experience as the season petered out to an uninspring 12th-place finish.

As with any promising youngster, it was widely expected that Anthony Gordon would be given plenty of game time in the coming season but, apart from really exciting early outings in the League Cup playing on the left with fellow up-and-comer Niels Nkounkou, his opportunities were limited. Ancelotti was asked about the academy product in 2020 and said:

“To develop a player, he needs to play but I am not here to develop players. I am here to try to keep this club at the top so sometimes I need Anthony Gordon... because I consider Anthony Gordon a player of Everton Football Club, not a player who has to develop."

His progress under Ancelotti was rewarded with a new 5-year contract in September 2020. Yet it was ultimately decided in January 2021 that a period of development away from Everton was in Gordon's best interests and he was sent out on loan to Preston North End for the remainder of that season.

But like so many loans, this one failed to meet the lofty expectations, as Gordon started only 5 games and did not get on the scoresheet.

“There’s no hiding that it hasn’t really worked,” a source told The Athletic. "Anthony wanted to make an impact at Deepdale and to get the chance to show what he’s all about. The manager who signed him (Alex Neil) got the sack [in March] and that obviously didn’t help. But when results weren’t going that well prior to him leaving, it seemed harder for him to go for a young attacking player when you needed to play the sort of football to stop a slump of form.”

Gordon rejoined first-team training at Finch Farm for the 2021 pre-season and played the second half of both exhibition games in the Florida Cup. He also came off the bench for the first Premier League game under Rafael Benitez and continued to establish himself in the first-team squad, producing a fine performance in a game Everton should have won against Manchester United at Old Trafford in October 2021.

As a crippling injury crisis deepened, Gordon would see more and more first-team action and with his willing running, he would cement his place in the starting XI, were a shining light in what would turn into a miserable campaign. Indeed, his ceaseless determination and effort on behalf of the Blue cause became one of the salient features of the club's battle to avoid relegation, even if there was a feeling at times that he had become something of a crutch for Benitez's failing tenure.

Still inexperienced and only 21, Anthony struggled to add end product to his game but he did weigh in with a vital assist in a backs-against-the-wall away game at Chelsea in December 2021 when Benitez had 12 first-team players missing but Gordon's fine free-kick delivery set up an equaliser for Jarrad Branthwaite to guide in at the far post to secure a very creditable draw at the home of the European Champions and register the last point the Spanish boss would pick up before he was sacked the next month.

Gordon would finally get on the scoresheet with a brace against Brighton and went on to complete an impressive breakthrough season where, after a slow start, he had been actively involved in every matchday squad since mid-September 2021.

Though still raw, his up-an-coming prowess as a potentially influential player bought unwanted attention in summer of 2022 from Newcastle and Tottenham, the latter supposedly wanting to tie Gordon in with their successful acquisition of Richarlison, but Benitez's successor, Frank Lampard, had made the youngster a focal point of his team and would not countenance any sale. Instead, Gordon was handed the No 10 shirt for the new season as a gesture of confidence.