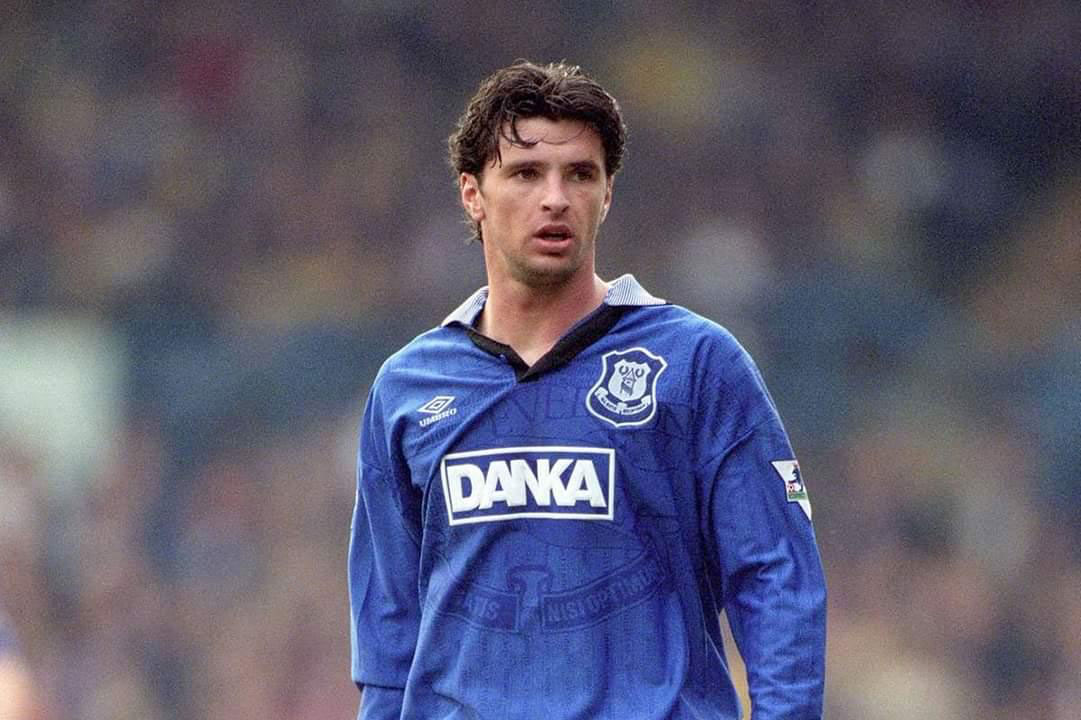 Everton FC are tightly interwoven into the story of Gary Speed, one of the finest midfielders of his generation and then a hugely promising young manager before he mysteriously took his own life in November 2011 at the age of just 42.

Though a boyhood Everton fan, Gary was a product of the Leeds United youth system and became a key player in their strong midfield in the early 1990s. He made his League debut in 1989 against Oldham Athletic and the Lilywhites won the Second Division the next season while Speed earned his first Welsh cap against Costa Rica in May 1990.

Speed played a vital part in making Leeds a solid proposition once they had gained promotion to the First Division and he playing an important role as they became the last champions of the old First Division in 1991-92 before the advent of the Premier League. In 1993-94, Gary was Leeds's second joint-top scorer with 12 goals as he established himself as a highly-coveted attacking midfield player.

Gary returned to his roots in the North-West with a dream move in 1996 when he signed for Everton under Joe Royle who hoped to build on a strong first full season in charge at Goodoson Park. "This was always my club," Speed said. "I used to come across from North Wales to watch them play from around the age of 12.  My dream was to play for the club and it's never really faded.''

"Maybe I stayed at Leeds one or two seasons too long. Maybe I need a move to get my career going again but that's all behind me now.''

Speed enjoyed a superb start to his Goodison career, scoring on his debut at Goodison against Newcastle United, when all the media attention had been on the debut for the opposition of £15m man Alan Shearer.

He scored his first-ever hat-trick in the 7-1 thrashing of Southampton, going on to become joint top-scorer that season (with Duncan Ferguson) and being named Player of the Year.

Then, on the eve of the 1997-98 season, new manager Howard Kendall surprisingly made Speed captain of the Everton team in place of Dave Watson, matching his captaincy of the Welsh national side for whom he usually played as a sweeper.

By the autumn of 1997, however, as Everton sank relentlessly towards the bottom of the Premiership table, Speed became increasingly restless.  Rumours abounded of links to Newcastle and Kendall later let it be known that Speed's agent had contacted the Magpies as early as the previous season, when Gary was, ironically, growing his reputation as the fans' unanimous selection for Player of the Year.

The root cause of Speed's problem with Everton will forever remain a mystery and the subject of much speculation and rumour. His agent, Hayden Evans, had been accused of unsettling both his client and Everton with rumours about Speed turning down a non-existent contract, and alluding to "hate mail" that Evans himself had probably generated through his inappropriate comments.

Then there was talk of sexual misconduct (not on Gary's part), threats of blackmail, police involvement and suggestions that then chairman Peter Johnson had been tempted to cash in on one of his more saleable players after Speed has supposedly been tapped up by Newcastle and had, behind the scenes, manipulated events to grease the wheels of the transfer.

Matters came to a head before an away fixture at West Ham towards the end of January 1998 when Speed refused to travel with the team, apparently after learning from a journalist that he was to be dropped and stripped of the captaincy. The previous game in which he had scored in a 3-1 win over Chelsea would be his last because Speed was hastily sold to Newcastle for £5.5m.

Many Evertonians rationalised Speed's decision as simply a case of monetary greed on his part and the part of his agent – this despite the fact that he had been offered more money to stay with Leeds in 1996, but chose instead to come to Everton – and condemned him out of hand. However, a confidentiality agreement prevented the fans from ever hearing the true story behind his decision.

He hinted at some dark secret which he could not reveal for fear of hurting the club, telling the Liverpool Echo: "You know why I'm leaving, but I can't explain myself publicly because it would damage the good name of Everton Football Club and I'm not prepared to do that."

There were strong rumours at the time that Speed had become deeply uncomfortable with the drink culture that existed at Everton under Kendall, one that had fuelled the club to glory in the mid-1980s but which had become an anachronism in the faster, fitter, modern-day Premiership. Kendall had apparently done what he could to keep him by offering him a substantial new contract (despite the fact that his current one had over three years still to run) but Gary's mind must have been made up. And yet the confidentiality agreement he signed on the way out always hinted that there was more to the story.

He returned with Newcastle a month later to a hostile reception and chants of "Gary Shithouse Speed" but, though no doubt hurt, he retained his dignity and professionalism throughout and went on to establish himself as a key part of his new team.

Gary Speed was an accomplished and effective attacking midfielder and his inexplicable disillusionment and departure represented a tremendous loss to Everton. Something made it impossible for him to stay at Goodison but he would take the reasons for it to his grave.

He went on to play in six very successful seasons with Newcastle before joining Bolton Wanderers in 2004. Later, on announcing his retirement from international football for Wales, despite a chance to claim his country's all-tie caps record, he said:

"The caps record has never been something that has made me want to keep going.  That would be very disrespectful to everyone who has played for Wales and certainly Neville Southall.  He was a fantastic player and the best keeper in the world on his day and a much better player for Wales than I have been.  I will not disrespect him by just carrying on for the sake of winning the record number of caps beyond when I think I should have retired from international football".

In December 2006, Speed became the first player to pass the landmark 500 appearances in the Premier League. Just 58 of those were for Everton, the club he had supported since he was a lad.

In 2009 he became manager of Sheffield United, went on to become Wales manager in December 2010 and appeared to be bringing fresh of life to their national team, when they beat Norway 4-1 in November. (Indeed, the seeds of the resurgence of Wales as an international player that would see them make it to semi-finals of Euro 2016 were attributed to the work Speed had done in his time in charge there.

However, the entire football world was shocked and devastated by the incomprehensible news of his death, at the age of just 42. He was a man who seemed to have it all – a wife, a young family and a blossoming managerial career – but , just like his departure from Goodison, the reasons behind Gary's apparent suicide remain shrouded in mystery.