Blues ease the pressure with handsome win over Newcastle 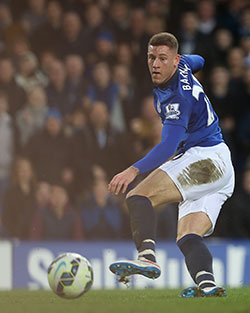 Everton won at home in the Premier League for the first time since December as they convincingly beat Newcastle United thanks in part to goals by James McCarthy and Ross Barkley that book-ended another confident penalty from Romelu Lukaku.

The Magpies played the last half an hour with 10 men after Fabricio Coloccini was shown a straight red card by referee Martin Atkinson for an ugly challenge on Aaron Lennon but, coming as it did with the score at 2-0 and Tim Howard having been untested since the second minute of the match, the Blues were largely in control by that point.

Starting the day just three points above the relegation zone, Everton needed to put in a gutsy performance and there was evidence that they were rising to the challenge almost from the outset. They survived a scare early on when Howard had to parry Gabriel Obertan's shot and McCarthy stopped a follow-up shot from Williamson on the line but then began to dictate the contest with a tempo and directness that has been lacking from their League performances for most of the campaign.

Lukaku had two long-range efforts saved by Tim Krul before Everton took the lead in the 20th minute. Phil Jagielka raked a ball from defence up to Lukaku with his back to goal and he laid it off neatly to McCarthy to wrong-foot the goalkeeper with a low drive from 20 yards out.

Roberto Martinez's side, playing in a rare 4-4-2 formation with Arouna Kone up front with Lukaku, took their foot off the pedal somewhat in the last quarter of an hour before half-time, however, but they largely kept Newcastle at bay with some stout defending.

It was crowd-pleasing tenacity from Aaron Lennon, enjoying his best performance in a Blue jersey thus far, that forced Yuan Gouffran into conceding the penalty that allowed the Blues to double their lead 10 minutes after half time.

The on-loan winger nipped in ahead of Ryan Taylor to initially win the ball and then showed a similar turn of pace to get in front of Gouffran and steal it a second time, the Frenchman hauling him down just inside the box.

Lukaku's request to take the spot kick instead of Leighton Baines was granted and the Belgian swept a tidy finish into the bottom right-hand corner of the goal to make it 2-0.

Things went from bad to worse for John Carver just minutes later as Coloccini went over the ball in a tackle with Lennon and was dismissed, leaving the Magpies with a mountain to climb.

Everton initially displayed some complacency, Tim Howard forced into an excellent one-handed save and Alcaraz putting in a last-ditch tackle to deny Remy Cabella but the home side carved out a number of good chances to add to the scoreline before substitute Ross Barkley did in stoppage time.

The 21 year-old had replaced Lukaku with 17 minutes left and was denied a goal by a goal-line clearance from Taylor within three minutes of his introduction but made no mistake when his fellow sub, Christian Atsu raced away on the counter-attack and played him in.

Barkley confidently rounded Krul and slotted the ball past the man on the line to wrap up a fine win that significantly eases the pressure on manager and team alike.

The victory goes a long way to strengthening the feeling that a corner has been turned following Everton's fightback against Dynamo Kyiv in the Europa League.

Martinez and his players were rewarded with a faster, more attacking approach and they can now look ahead to Thursday's all-important trip to Ukraine for the second leg.