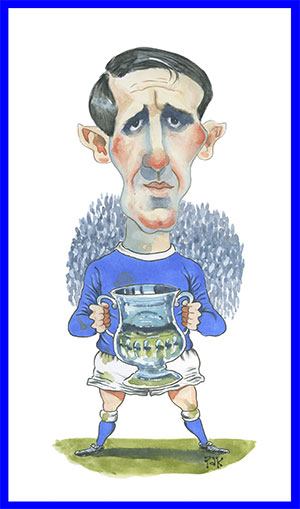 In aid of the local charity Health Through Sport, Ronny Goodlass – an old pal and lifelong Blue – is organizing a tribute evening for Derek Temple – another old pal and lifelong Blue – on Friday, 6 May at the Devonshire House Hotel, Liverpool. (Contact 0151 264 6600 for tickets). To prepare for this royal blue love-in, Ronny asked me to prepare a few words describing my favourite memories of our 1966 FA Cup winner. Here goes...

My first glimpse of Derek Temple was 59 years ago and coincided with my own royal blue baptism. I remember entering the Paddock and feeling like the luckiest 8-year-old in the world. I can close my eyes and picture the floodlight pylons which pierced the heavens, the criss-crossed balconies which trapped the passion, the mixed aroma of Brylcreem, Higsons and Woodbines unique to football grounds in the Fifties, the noise from 72,000 like-minded worshippers, the emerald, olive, bottle and jade patchwork of the manicured turf and, of course, the royal blue shirts of my heroes – Wally Fielding, Dave Hickson and Derek Temple, then an exciting prospect who had netted the winner at Villa Park a few days earlier.

The 3-3 draw with the Busby Babes was a cracker. The proceedings were dominated by Duncan Edwards – a United powerhouse who made other world-class players question their own abilities – and a raw 18-year-old nicknamed ‘Shirley’ who had yet to fulfill his National Service obligations. The Everton No 8 scored twice that evening. I recall that his late equalizer resulted in my father breaking into a happy dance.

Another fond memory of Derek was during the 1963 run-in towards the title. By now I was a big fan of the home-grown winger and his all American crew cut. In addition to surviving the challenges of Obama’s grandfather and the other Mau Mau rebels in Kenya, he had fought off the might of John Moores’ cheque book and subsequent competition from Bingham, Fell, Kavanagh, Laverick, Lill, O’Hara, Ring and Veall to deputize for Johnny Morrissey in the final four games. He made no small contributions to all four victories and deserved his place in the thunderous lap of honour. Derek kept his place in the line-up for the next three or four campaigns alongside Alex Young, Roy Vernon and then Fred Pickering to average 15 goals per season. Not bad for a winger.

This leads me to the Anfield derby of 1964 when Harry Cattrick fielded a weakened defence – no Alex Parker or Ray Wilson as well as a weakened attack – no Young or Vernon. Surrounded by 30,000 loveable Reds in the Kop, my mate and I were fearful of the outcome. So much so that we searched the crowd for friendly Blues. Their locations became evident shortly after Derek scored in the very first minute. The Kop erupted and a third of the terraces, possibly more, turned blue and white. It was an unforgettable experience. Yes, that afternoon we reclaimed Anfield in the name of George Mahon and our founding fathers. Our celebrations continued throughout the first-half as Colin Harvey and Fred Pickering found the onion bag. And later, Johnny Morrissey reminded Bill Shankly of the rugged skills he had discarded.

You may know that cynical tackles from behind were termed professional back in the Sixties and the game’s hard men like Morrissey were more likely to be dismissed for dissent than violent conduct. Therefore another enduring memory was of him being stretchered off during one of football’s most notorious confrontations. The 1964 Battle of Goodison with Leeds burst into flames after four minutes when Johnny Giles left stud marks on the chest of Sandy Brown. Our defender retaliated by pole-axing his opponent with a monster left hook of remarkable precision and worthy of Smokin’ Joe Frazier. Immediately, Goodison erupted. Any Leeds player daft enough to stray within throwing distance ran the risk of being struck by the missiles. Things came to a head after 35 minutes when Willie Bell launched a two-footed tackle at about shoulder height towards Derek. The crowd exploded into a seething mass of rage. As our hero was being carried off by the St John Ambulance Brigade, the ref ordered the other players to the dressing rooms to give them and the crowd time to calm down. I was impressed when Derek reappeared after a 10-minute ceasefire which did little to soothe the fury of the players or the hostility of the fans. To his immense credit, my hero never shirked any of the subsequent two-footed challenges dispatched by Dirty Leeds.

This leads me to memories of 1966. My run up to the FA Cup final had involved a big decision. As a devotee of Bob Dylan, I had queued for hours to buy a ticket for his Liverpool concert. Cruelly, the timing of his gig coincided with that of the final. Dylan live at the Odeon versus Young and Temple live at the Empire Stadium was no contest, even though I had a ticket for the former and not for the latter. I remember spending an hour pleading for one outside Wembley Underground Station before catching the Tube to Finchley Park where I squeezed onto a northbound train and pestered the passengers for a 'spare' until the carriages emptied. I repeated the round-trip before buying one for the equivalent of an apprentice's weekly wage. It was a small price to pay for one of the best afternoons of my life.

A few years ago, I had the pleasure of watching video highlights of the clash with Wednesday alongside Derek. You’ll recall that Gerry Young had lost control of the ball near the half-way line and my hero sprinted some 40 yards with the ball at his feet. I asked him: ‘Could you hear the defenders behind you as you approached the box? What went through your mind as Ron Springett grew bigger and bigger? When did you decide to pull the trigger?’ He confessed: ‘If I had been Alex Young I would have dribbled up to the keeper before waltzing around him, nut-megging him and back-heeling the ball into the net. But my alternatives were to chip the keeper or to blast the ball past him. I noticed that Springett, a top-class keeper, had advanced from his line and decided to try my luck from the edge of the box. Fortunately the ball behaved itself.’

Later that summer, I returned to Wembley to attend the World Cup final but the FA Cup final was the highlight of my sporting calendar in 1966. For me, only one sight can compare with Brian Labone wiping his hands on his white shorts before lifting the trophy and that is the massive crowds – Blues and Reds together – gathered outside St George’s Hall to welcome Brian, Derek and their team-mates. The atmosphere was ecstatic, effervescent, exuberant and much more.

Over the past couple of decades I’ve been proud to call Derek my friend – the type of kind, modest and loyal friend that everyone should have. While his support for our Former-Players’ Foundation is unwavering, his commitment to the royal blue cause compares with those of Labone, Harvey, Wright, Lyons and Royle. I can pay him no greater compliment. I trust that for as long as people talk about Everton Football Club, they will celebrate the immense contributions of Shirley.

The golden jubilee of that final is less than 100 days away. In addition to the royal blue love-in planned by Ronny Goodlass, I do hope that someone at Goodison will arrange for a more formal get-together of all surviving members of our magnificent 1966 team, namely Tommy Wright, Ray Wilson, Jimmy Gabriel, Mike Trebilcock, Alex Young, Colin Harvey and Derek Temple as well as Fred Pickering whose goals got us to the semi-final. I’m well aware that Ray (now age 81) and Alex (age 79) are not in the best of health and that Gabby and Mike live in far-flung corners of the world but Blues of all ages deserve a chance to thank them for their breath-taking deeds at Wembley.

I’m sure that other Blues have other fond memories of Shirley.