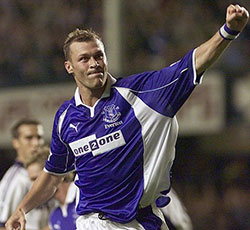 The final warm-up game of the 2015 pre-season programme sees Everton take on Villarreal at Goodison Park for Duncan Ferguson's testimonial this afternoon.

Coming nine years after he hung up his boots, this is a belated chance for Evertonians to pay tribute to a Talismanic figure from a difficult period in the club's history and benefit the big man's chosen local charities.

Ferguson will don the famous No.9 jersey one more time for a few minutes of the match, perhaps alongside the forward he briefly shared a team with more than a decade ago in the form of Wayne Rooney.

The ex-Blue turned Manchester United vanguard and skipper will also pull on a Blue jersey again to play as an guest of Ferguson's against the Spanish side.

Roberto Martinez will give playing time to those players who did not feature in yesterday's 2-0 defeat at Leeds United but Romelu Lukaku is unlikely to be risked with the Premier League opener against Watford just six days away.

We have to remember it's Dunc's testimonial and he invited Rooney himself.

Out of all the pre-season matches today will be the most carnival unrealistic one, naturally because we know Rooney or Ferguson won't be a part of our plans again this season so it's just all about enjoying the day.

90 mins for Rooney and Duncan? Possibly the best strike force we will see all season.

I hope he tries Mirallas as a striker though then I don't know who plays on the wings.

Maybe today will be:

Hopefully Barkley won't play again as he played yesterday so nothing will spoil the day.

Brian Porter
8 Posted 02/08/2015 at 11:18:30
I hope John Stones plays and has a bit of a mare. Mourinho has just hinted he may give up on Stones, possibly not wanting to go over the 㿊M mark. The most telling remark he made however is saying five top defenders are not enough for the Premier League. Are you listening, BK & RM?

We must bolster our defence before the end of the transfer window, as it would be unfair to expect our mostly untried youngsters to carry too much responsibility without being given a gradual introduction into the first team, or is Martinez just going to throw them in, in a sink-or-swim gamble? If so, the man is more deluded than I thought and must be got rid of before he wrecks yet another season for us.

I wish the team well today, but after yesterday just can't get enthusiastic. Same old tactics, no penetration and few creative ideas from manager or players.

I was so gutted when he left us and never really forgave him until recently.

The reality to me was - we sold him - and that he didn't initiate jumping ship.

He had a money grabbing agent - and was wanted by the most successful club in the land. He was young and did what he was told. This probably included - "This money will save Everton".

I believe he still loves the club.

I think he's brave coming back to do this for his mate. We should be decent to the guy.

I still believe he might come back one day - and even if he was 34 - I'd love to sing 'Rooney'! once again.

Then, on Monday afternoon, let the combined Likely Lads and Youth team's best chase our opening EPL game's team around the ground at Finch Farm then they would all get 90 minutes.

If we are to invite overseas teams to Goodison for friendlies, then I hope we at least pay them the respect of playing Everton's best.

But doesn't everyone score on their testimonial?

He has given his best years at another club which has already unloaded enough of their rejects on us.

Let's grow another young "Rooney" and encourage them to stay.