Galloway happy to have found the 'whole package' in Everton 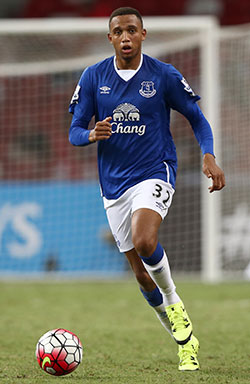 Brendan Galloway has been speaking of his delight at signing an improved deal at Goodison Park that ties him to the Blues until 2020.

His new contract extended the contract he initially signed when he joined from MK Dons in the summer of 2014 and was a reward for his impressive performances over the first four months of the season.

Galloway was promoted to the first team as Leighton Baines's deputy at the end of last season and was then asked to continue in the role in August when Baines required another operation on his ankle.

In all he has made 16 appearances in all competitions this season in the left-back role in which manager Roberto Martinez says he plans to blood him before moving him inside to his preferred position at centre half after around 60 games.

The 19-year-old acknowledges that agreeing to join the Blues last year was the perfect decision for him.

"There is no doubt about it, I came to the best club for me and with the manager, staff and other senior players it was important to get that whole package," Galloway told the Liverpool Echo.

"It is very hard to find that whole package in football but I have found it here and now I am just looking forward to learning a lot more."

"I've improved in knowing how to play in the Premier League. I was new to it at first but in the games I've played, I've settled in but even towards the back end of last season, when I was still with David Unsworth in the under-21s, he taught me a lot about what to expect in the Premier League.

"So there were no surprises. He's played a huge amount of games for Everton and so he knows what it takes."

Clive Rogers
3 Posted 22/12/2015 at 22:29:04
James, agree with you in general, but he's young and was beginning to look like he needed a rest. Also Bainesy will need 7 or 8 games to get back to his best after such a long lay off.
Tony Hill
4 Posted 22/12/2015 at 22:34:07
A very fine prospect with a hard streak. He has the priceless defensive gift of being able to recover himself with pace if he loses his position or possession. In truth, his form unsurprisingly waned in the last few games before he went out of the team and, as Harold Matthews has pointed out, he needs to develop his right foot.

I suspect he'll turn out to be a central defender rather than a left back, and a very good one at that. A gem.

Andy Mack
5 Posted 22/12/2015 at 22:37:32
Happy for the lad, terrific talent and fast tracking his way to a full first teamer. It's great when we actually give a youngster a go. We've let so many pass through the door without even giving them a fair crack.

Isn't he actually a CB? would like to see him tried there as well, maybe when Jags is back, as I've no faith in Funes Mori or Stones to help guide him at that position, no need to drop Baines, who is class, rusty right now, but class will shine.

Back line defenders can only do so much and when the opposing teams come at them with extra men, bypassing Everton's midfielders then they can be stretched.

You need quick strong tacklers to avoid this and at the moment except for Macca this area is not up to snuff.

The second half of the season may well prove RM's downfall despite the rising talent in the squad.

I love ya, Brendan... already.

Galloway has been targeted in many games but has done well, despite the flimsy cover he has had from certain "left wingers". With Browning to come back, we have some real lads for the future.

Interesting thing about the young Argentinian. When he arrived at River Plate he played in Barry's position. A tough, no nonsense defensive midfielder. Eventually, with that position already covered, they tried him at left back before moving him to CB.

I'd still give Brendan the Tottenham game on January 3rd, three days before we play City in the first leg, I'd hold Baines back for that..

I disagree with those who suggest he was instantly dropped for Baines. I feel Baines was ready a few weeks before he got back into the side. Galloway's performances allowed us to be more patient with Baines's recovery.

Brendan can now recharge his batteries and focus on his development rather than gameplans.

Tom Vivian
17 Posted 23/12/2015 at 22:44:19
No doubting the lad's got talent and a lot of natural ability. Delighted he's signed a long term contract. Not a replacement for Bainsey yet though... we need someone to give Gerry a helping hand with the supply lines. We're gonna get found out soon when the oppo realise all they have to do dry up the supply from Gerry to Rom.

Hoping Bainesy gives us the same option down the left and starts using that wand of left peg that we haven't seen for a while, to good effect, and we start seeing those assists rolling in like they were a couple of years ago...in fact, sod it, i'm sold... I'm drafting him in to my FPL team for the Xmas fixtures.
Kase Chow
18 Posted 25/12/2015 at 00:16:15
Baines is (in an attacking sense) the best full back I've ever seen.

It's a travesty that Martinez has nullified him. Absolute disgrace

Galloway has a huge huge future in the game. Well done the scouts and well done to the lad