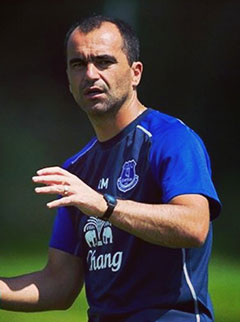 Everton slumped to their fifth home defeat of the season and their first League defeat to Swansea City in history thanks to another penalty calamity and Andre Ayew's deflected winner.

The Blues' run without a win in front of their long-suffering and increasingly frustrated fans still dates back to November and was extended to a fifth game by a demoralising loss that keeps them in the bottom half of the Premier League, their waning top-four hopes effectively over.

Roberto Martinez made two changes to the team that had come within seconds of a famous win at Chelsea last weekend as he rested Phil Jagielka ahead of the Capital One Cup semi-final second leg against Manchester City on Wednesday and deployed Gerard Deulofeu on the right flank in place of Aaron Lennon.

The warning signs of the difficulties to come came early, however, as Swansea, belying their poor record of just one away win all season, began with composure and a desire to possess and pass the ball.

Yet it was Everton who almost took an early lead when Muhamed Besic advanced into space ahead of him and raked a low shot off the outside of the post with Lukas Fabianski rooted to the spot. Unfortunately, the Bosnian's impressive effort may also have been the moment he again damaged his hamstring and, for the second time this season, he was forced off before 10 minutes had elapsed to be replaced by Tom Cleverley.

And things got worse for Martinez's side when John Stones, playing with fire again on the edge of his own penalty area, delayed a pass back to Tim Howard long enough for the alert Ayew to close him down and the American took the Ghanaian out with his attempted kick. Referee Anthony Taylor pointed to the spot and Gylfi Sigurdsson despatched an unstoppable kick into the top corner.

Not for the first time, Everton were forced to respond and were level inside 10 minutes after Deulofeu's goalbound shot had been blocked behind well by Neil Taylor. The resulting corner bounced short where Gareth Barry nudged it goalwards and the ball took a decisive knick off Jack Cork before bouncing in off the far post.

Already looking uncomfortable before the goal, Kevin Mirallas then had to go off with a leg injury which prompted Martinez to throw Steven Pienaar but the Blues had barely had time to settle again before Swansea reclaimed the lead.

A handball by Ashley Williams was ignored by the referee and the visitors played on, with Ayew finishing an incisive move with a shot that took a heavy deflection off Stones and looped over Howard to make it 2-1.

Everton could have been level almost immediately but Romelu Lukaku, who was off-colour for much of the afternoon, screwed his chance just wide of the post from 18 yards. Barkley meanwhile created a great chance for himself with a wonderful run but his final effort was blocked before it could trouble Fabianski.

Having survived an early scare early in the second half when Wayne Routledge was put clean through but Howard denied him as the winger tried to fire a shot under his body, Everton gradually assumed almost total control of the contest.

It would prove to be an exercise in frustration, though, as they struggled to find a way through the Swans' defence that was marshalled well by Williams at centre half.

Lukaku curled a shot well wide from outside the box but for much of the second period, almost all the danger from the home side came from Deulofeu's array of crosses from the right flank and first Pienaar and then Lukaku came very close to converting the best of them. Unfortunately, the South African put his chance at the back post over the bar and the Belgian was inches away from making contact with the ball as it flew past him with 15 minutes to go.

More excellent footwork by Barkley on the other side saw him tee up Lukaku with a chipped cross but the striker couldn't get enough power on his header to beat the goalkeeper who made a diving save as the game entered the final few minutes.

Everton continued to press for the goal that would have earned them their eighth draw of the campaign and twice looked have got it in the dying moments but Seamus Coleman, on as a substitute for Bryan Oviedo, contrived to drag one shot wide with just Fabianski to beat and then somehow scooped the last kick of the game over the bar when it was easier to score from two yards out.

The defeat heaps more pressure on Martinez who has overseen just six wins in the Toffees' 23 games in the Premier League so far and amplifies the importance of Wednesday's cup tie that could hand the Catalan some respite from his woes in the league.