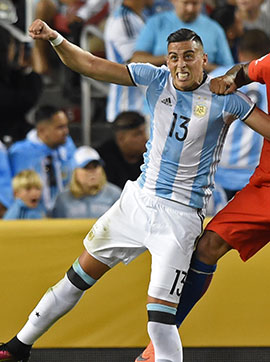 Funes Mori featured again in a very impressive Argentina side, but playing an advanced left-wing-back role as they blew out Bolivia 3-0.

Already qualified for the quarter-finals of Copa America, Argentina strode into an easy three-goal lead in this dead rubber against Bolivia, played in Seattle's Century Link Field.

Other interest for Evertonians included former transfer target Ever Banega playing in midfield, while Tottenham's Eric Lamela was credited for the first goal, deflected off the wall defending a free kick. Lavezzi scored the second with a close-range volley, then became provider for Cuesta to neatly deflect the third in just past the half-hour.

Funes Mori stuck resolutely to the left touchline in his wide role, and preferred to play the ball back most of the time, rather than advancing and risking lost possession.

But the raucous Seattlites wanted only one thing: to see Lionel Messi, who came out to start the second half to massive hoopla, having sat out the first half, replacing Higuian. The genius came very close to scoring with a superb free-kick on the hour mark as this degenerated into an exhibition match.

Most of the play in the second half was through the middle or down the right, leaving Funes Mori as a peripheral figure on the left, rarely getting a touch.

There were no more goals in a rather disappointing second half, with the crowd expecting a Messi hat-trick that never materialized, but Argentina, as a team, and as individual players, looked very, very good and remain favorites to win this competition.


Brian Cleveland
1 Posted 15/06/2016 at 07:18:12
Yeah how weird was it to see him out wide and further advanced than Lamela most of the time. Even when Argentina lost the ball he never really had to run back and help defend, Bolivia didn't have it long enough to make it worthwhile.

As mentioned, he did generally just knock it back again or sideways rather than show off his silky wingers skills. Made a few runs hoping to get on the end of long diagonals but never really amounted to much.

Probably had to go for a run afterwards to get a bit of exercise, not tested at all!

Overall Argentina looking good, but I think Colombia's kick in the pants losing to Costa Rica after changing the whole team might make them wake up a bit (but I'm biased as I live there!) plus they dodged a bullet with the surprise elimination of Brazil, now facing Peru instead.

So Argentine having Funes Mori as a left back is just playing the Italian way. I hope Koeman keeps that in mind for Everton next season, because Everton on many occasions were quite shocking at the back last season.

Brian Cleveland
7 Posted 15/06/2016 at 15:26:39
Matt (6), I thought he had been given permission to play, that is certainly what was stated here... has there been a change of heart on that one? Playing both competitions certainly seems a little extreme.

Steavey (5), he was hardly a full back, Argentina were so superior that he was so far advanced he couldn't be considered part of the back four (which was really a back 2 and at best back 3!) and I don't remember him actually doing anything defensively, but point taken, a good solid defence is essential, you start a building with the foundations.

You're right about the solidity of the Italian defence. "Proper defending" as said by Martin Keown in commentary.

Italy play with three central defenders and wing backs. That allows you to play with two forwards. In my opinion, it is a system we will see adapted in the Premier League this season.

Steavey Buckley
9 Posted 15/06/2016 at 16:34:56
Brian Cleveland: just because there are 4 centre backs playing in the back 4 does not mean when playing inferior opposition they have to remain that way. Yet, when Everton played good opposition either home or away last season, the Everton 2 full backs were expected to get forward; but this allowed the opposition to exploit gaps in the defence. Something that should not happen next season.
Brian Cleveland
10 Posted 15/06/2016 at 18:17:22
Steavie, no disagreement at all, it was just in my mind the situation Italy and Argentina found themselves in were so different that to use the term defence for Argentina yesterday was a complete misnomer.

But yes, I liked the look of the Italian defence too, pretty solid, even though all the Italians I know don't rate their current team... no pleasing everybody is there?

Steavey Buckley
11 Posted 15/06/2016 at 18:45:49
Paul Andrews a 4-3-3 is the best attacking formation if there are 4 defenders at the back whose primary job is to defend as a solid unit; this allows the other 6 players more freedom to attack. But once there are 2 wing backs or 2 full backs who take up forward positions the defence is automatically weakened. Everton last season played on most occasions a 2-2-2-2-1-1 formation; no wonder Everton conceded 3 goals every 2 games on average.
Paul Andrews
12 Posted 16/06/2016 at 06:30:37
Steavey,

I agree; I advocated a 4-3-3 all last season. I was just pointing out the system Italy play – three central defenders, not a back four.