Calvert-Lewin among the goals and enjoying life at Everton 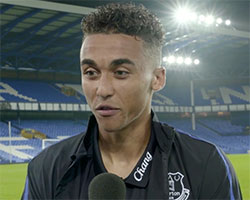 As he settles seamlessly into his new surroundings at Everton, Dominic Calvert-Lewin is progressing nicely at Under-23 and Under-20 level for club and country respectively.

The teenager, a £1.5m capture from Sheffield United on transfer deadline day in August, has been scoring goals for both teams in recent weeks, his latest being a crisp volley from near the edge of the penalty area against Manchester City that took Everton's U23s to the top of Premier League 2.

Calvert-Lewin was obviously proud of the strike and, as he revealed to evertontv, he has been using his time training with the first team to improve himself with the hope of catching to attention of Ronald Koeman.

“I'm really pleased [with the goal against City's U23s], obviously,” he beamed. “I've scored a couple this season but I'd say that's right up there with one of the best I've scored so far.

“It just happened to drop quite perfect and I just thought, ‘hit it', and thankfully it's gone in.

“You always know when you've hit one sweet. I just anticipated. I thought the defender was going to just nod it on to the edge of the box, I've just carried my run on and I didn't really have to break stride and I've just found the bottom corner.”

The Sheffield-born striker has been with the Blues less than three months but he appears relaxed and unfazed by his new challenge.

“I'm really enjoying myself,” he continued. “I've obviously started training with the first team a little bit now, which I'm really enjoying, just improving every day, listening and learning, picking up on little things… how I can become a better player and trying to keep pushing on.

“You're watching better players. I'm learning from Lukaku and that's an experience in itself but there's loads of little bits you pick up from everybody; from the boss, Erwin and Dunc… people like that, so it's a good experience all round.

“I'm all eyes just looking and learning really. It's a different battle when I'm up there. I have to be that extra per cent better. each training session is like playing a game and I'm only going to get better from it.”

The Germans seem to believe in the old saying, 'If you're good enough, you're old enough,' a mantra apparently forgotten or ignored by most managers in our league. Lads like this would I'm sure be getting plenty of first team experience in other countries and by the time they hit 23 or 24, they are at the top of their trade.

Compare the German example to ours, where we have U23 players of undoubted ability who will never get a look in with the first team.

Lewis Montgomery
6 Posted 23/11/2016 at 09:58:03
I can't wait to see how he'd get on in the first team either, but we all know, as soon as the transfer window opens, there'll be post after post demanding the club splashes the cash on established quality, with experience at the highest level.

If we pick up a really good prospect like this lad for ٟ.5m, it'll most likely be met with sarcasm and whinging. A percentage of these young lads will prove themselves good enough and become first team regulars, but most won't â€“ that's just the level we're at at the moment.

Against Chelsea (U23) he didn't get much change out of a solid defensive pairing that included Kurt Zouma. He was the most willing of the front 3 (Henen, Dowell and him) but ultimately ran out of ideas and desire.

But, aside from that, I wish him and other youngsters were tried a bit more. Their enthusiasm can be refreshing compared to the so-called experienced "professionals"

Do you want all Evertonians to become Klingons? That really is totalitarian thinking.... :)

The only youth players we ever seem to use are the so-called world beaters!!!!

"Rashford is 20 and been playing so why the fuck do Everton managers play so conservatively with youth?"