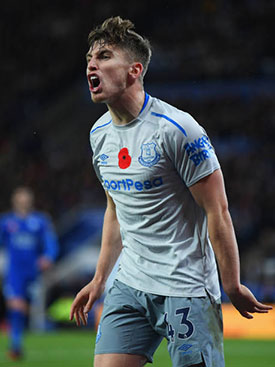 Everton suffered another defeat, their fifth in the last six games in all competitions, as David Unsworth was unable to spark a revival in the team's fortunes at Leicester.

The Blues fell behind after 17 minutes when they were caught on a lightning counter-attack by the Foxes and Riyad Mahrez crossed low for Jamie Vardy to sweep home.

Disaster then struck for young fullback Jonjoe Kenny when he sliced Demarai Gray's attempted cross past Jordan Pickford, leaving Everton with a mountain to climb for the remaining hour of the game.

Unsworth had named a similar line-up to the one that started at Chelsea in the League Cup in midweek, with the exception of Idrissa Gueye returning from suspension to replace Beni Baningime in midfield and Dominic Calvert-Lewin in the starting XI in place of the injured James McCarthy.

Everton were sloppy in the early going, however, and Gray sounded a couple of warning shots with dangerous crosses, one of which Ben Chilwell scooped over the bar from around the penalty spot.

When a poor free kick from Leighton Baines was cleared, however, Leicester broke, with three Everton players a failing to prevent the breakaway and Vardy was the eventual beneficiary to open the scoring.

Mahrez might have done better with a clear shot on goal after holding off Ashley a Williams but fired straight at Jordan Pickford before Wayne Rooney threaded a beautiful pass in for Aaron Lennon but the winger chose to try and cut it back for Calvert-Lewin rather than shoot and the chance went begging.

Two minutes later, it was 2-0 when Kenny's unfortunate error compounded Everton's problems but they were denied the chance to halve the deficit by a horrible error of judgement by referee Andre Marriner. Lennon appeared to be fouled in the penalty area without the defender touching the ball but the official waves play away despite being well-placed.

Kevin Mirallas then twice went close, smashing one effort a foot wide of goal and seems another tipped behind by Kasper Schmeichel but while he seemed the most likely player in gray to make a difference, the Belgian didn't reappear for the second half.

Unsworth elected to replace him with Oumar Niasse and throw Beni Baningi,e on for Lennon at half time. The result was a more solid, dominant second 45 minutes from the Toffees' perspective but they carried almost no goal threat.

Rooney' chipped pass found Niasse in the box but his first touch was clumsy and carried the ball through to the goalkeeper while Gueye's speculative effort deflected over and a Phil Jagielka overhead kick following a corner was safely gathered by Schmeichel.

There was plenty of commitment and possession for Everton but almost no more clear-cut chances and Leicester ultimately held on for what was their third successive win in all competitions and their first in the Premier League under new boss Claude Puel.

For Unsworth, while his first audition at Stamford Bridge offered hope, this result will have brought home some stark realities about the Blues' situation as they remain in the bottom three.