Everton booed off again after crumbling at Turf Moor 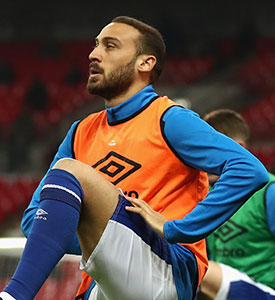 Everton lost away from home for the sixth successive match in all competitions as Burnley came back from a goal down to win it in the second half.

Responding to a half-time shake-up by manager Sean Dyche, the Clarets cancelled out Cenk Tosun's first-half header when Ashley Barnes fired past Jordan Pickford 11 minutes after the interval before substitute Chris Wood capitalised on non-existent defending to head home the winner.

The Blues finished the match with 10 men and then a barrage of boos from the sold-out away end following Ashley Williams' dismissal with a straight red card for flinging an elbow at Barnes in the closing stages.

Despite insisting after the recent warm-weather training camp in Dubai that only injuries would dictate his team selections going forward, Allardyce responded to last weekend's defeat at Watford with more changes to his line-up.


Cenk Tosun was handed a long-awaited third start up front, with Dominic Calvert-Lewin coming in for Wayne Rooney to play wide on the left. Seamus Coleman returned at right back after overcoming a thigh problem while Leighton Baines took a place among the substitutes.

Everton started the game in positive fashion, with Tosun looking lively and quick but the best chance of the game would fall the way of Theo Walcott after Johann Berg Gudmundsson had seen one shot saved by Jordan Pickford and sliced another well off target.

Great work by Gudmundsson's international team-mate, Gylfi Sigurdsson, as he danced to the byline and cut the ball back looked to have put the opening goal on a plate for one of the advancing blue jerseys but Walcott and Tom Davies got in each other's way and the former lashed wide.

Former Blue Aaron Lennon then created a good opening for Jack Cork at the other end but he blasted over before Everton took the lead.

More impressive work by Sigurdsson following a 20th-minute free kick allowed him to play Walcott in down the right and when the winger's cross was flicked on deftly by Coleman, Tosun met it perfectly with a strong, placed header past Nick Pope.

1-0 almost became 2-0 as Walcott burst through and set up Tosun but his attempted shot across the goalkeeper was saved and the former Arsenal man was denied by Pope himself a few minutes later as Everton burst away on the counter.

Burnley remained a threat themselves as long as they were allowed to get crosses into the box from the flanks and it took a tremendous save from Jordan Pickford to keep the home side out with half an hour gone. Stephen Ward's cross picked Barnes out on the edge of the six-yard box but his glancing header was pushed away one-handed by the Blues' ‘keeper.

A teasing ball by Tosun was touched past his marker expertly by Walcott but his finish was a touch weak while Lennon almost set Ben Mee up for Burnley following a poorly-defended free kick but the defender didn't see the ball drop in front of in the six-yard box before Pickford pounced on it.

Sensing, perhaps, that his side could hurt the visitors' shaky defence with more height up front, Dyche introduced Wood at half time and he wasted no time in hassling ex-Claret Michael Keane into conceding a corner that caused momentary panic in Everton's penalty area.

A minute later, Pickford was prompted into more urgent action when, first, he dived to his left to push Lennon's half-volley behind and then got a strong hand to Mee's header from the resulting corner.

It was from the ground, however, that Burnley equalised in the 56th minute when James Tarkowski pinged a ball behind the lead-footed Keane for Barnes to race onto. With Pickford uncharacteristically hesitant on his line, the striker rapped it past him and wiped out Everton's lead.

Having learned his lesson, Pickford snuffed out a near carbon-copy move 10 minutes after that with a smart block but, despite the introduction of Wayne Rooney for Davies in the 59th minute and then Oumar Niasse for Tosun in the 68th, Everton were spending the majority of the second half on the back foot.

And yet, after a wild effort from Niasse, they could have retaken the lead had Sigurdsson not clipped a great chance wide shortly before Burnley scored their second. Once again, the Icelandic star jinked around his man with deft footwork but put his final shot the wrong side of the post.

Back at the other end, after Lennon has seen another shot deflect wide, Williams left the 6' 3” Wood completely unmarked at the back post and the New Zealander had the simple task of heading home from the resulting set-piece.

Allardyce prompted more boos from the seething away end when he hooked Sigurdsson in favour of Yannick Bolasie with seven minutes left but the last incident of note wouldn't be an Everton equaliser but the latest chapter in Williams's catalog of shame. Reacting to jostling in the home side's area as he contested a late set-piece, the Welsh skipper threw his arm into Barnes's neck and was swiftly sent for an early shower by referee Chris Kavanagh.

Everton threw the ball forward in the closing stages but to little effect and were condemned to yet another loss on their travels under Allardyce.

It was Burnley's first win in 12 in all competitions, the first time the Clarets have done the league double over Everton in 60-odd years and the only time under Dyche that they have come back from a goal down to win a Premier League match.

Their win keeps them safely in seventh and on course for possible Europa League qualification; for Everton, the inquest into the recruitment failings that have led to such a poor season and Allardyce's continued tenure will intensify following a run of just two wins in 12 games.