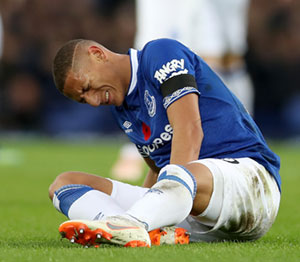 Everton endured their toughest test to date this season when they stopped Chelsea scoring at Stamford Bridge, but lacked the guile needed to win the game.

Richarlison is fit enough to start and Yerry Mina makes his full Premier League debut, 3 months after joining Everton from Barcelona. Kurt Zouma makes way — he is ineligible for this fixture against his parent club.

For the home side, Ross Barkley is on the bench as Eden Hazard displaces Pedro.

Everton kicked off in their white kit, and started with some nice passing that went backwards and sideways. But Everton did get it down the wing to Coleman and his cross led to an early corner, Digne fiding Keane who seemed to get in front of Mina; one of them really should have scored.

Bernard was clipped on the run, giving Everton a free-kick that Digne plays in perfectly for Mina who somehow fails to do anything with it! Second chance gone begging. Richarlison had a chance to run at the Chelsea defence but was pushed wide and then dispossessed.

Some key midfield possession surrendered by first Gomes, then Digne. But a great run down the right by Coleman won another corner, cleared to Barnard who fires just wide. Third chance! Really good start by Everton.

Gomes took it off Willian, who immediately recovered it. Richarlison got forward but was flagged offside. Mina hoofs the ball forward to no-one. Richarlison passes the ball out of play. Everton were now allowing Chelsea to play and Digne had to head a brilliant cross behind for Chelsea's first corner... which they worked all the way back to Kepa.

Digne had to be alert in defence but the Whites were being well penned back, Chelsea seemingly upping their game in response to Everton's fine early play. Gomes, then Ganna beaten by high pressing, unable to go forward. Mina won a ball clearly Hazard running into him. Friend blows, and Everton players are livid, surrounding Friend. But in slo-mo, Mina did catch his ankle before he got the ball. Yellow card for Mina. The free-kick was eventually taken, Alonso firing just wide of Pickford's post.

Even with possession, Everton were no longer clicking, Walcott missing a great Sigurdsson overlap; Gana firing his pass out over Digne's head. Sigurdsson finally got the ball but was chased down ruthlessly by Jorginho and then fouled horribly, a two-footed red-card challenge, but only yellow, of course, from our Friend, Sigurdsson screaming in pain.

Another good delivery from Digne that Keane headed well over, as Sigurdsson gingerly returned to the field. Kante fouled Richarlisonfrom behind: Yellow Card. Chelse definitely knew they were in a game here but once again, their quality down the Everton right, whipping in a cross that caused mass panic in the Everton area before it was finally cleared.

Everton got the ball out to the right to Walcott but Marcos Alonso puts his studs into Walcott's foot in another illegal challenge that goes unpunished. Really clever dirty play bu Chelsea throughout this half.

Gomes (?) is called for a foul, and from the free kick, Alonso peels away to the left and volleys a tremendous shot at a tight but very goal-bound angle, forcing a brilliant save from Pickford.

Morata drives into the box but he slips under minimal contact from Lucas Digne. A few Chelsea players appeal but referee Kevin Friend waves it away as it's clearly not a penalty, Coleman telling Morata of the fact.

There was a flashpoint between Bernard and Rudiger off the ball that saw Rudiger feign a head butt as Everton broke away, Willian fouling Bernard as he cut across the Chelse player. Friend finally stopped play and booked both players for 'adopting an aggressive attitude'.

Chelsea attacked from the restart and Pickford was immediately in action, saving from Morata, Mina having done enough to shield the cross. Sigurdsson broke away well and brilliantly played in a fantastic ball for Walcott who totally messes up, awful first touch.

Some good Everton passing ended when Gomes overhit his pass for Digne. Chelsea attack and Hazard gets behind the Everton defence lashes a cross right through Morata. More good play from the home side ends with Pickford grasping the ball. But it was proving really hard for Everton to break out as Barkley intensified his warm-up.

Great work from Digne and Barnard set up Sigurdsson for a classic shot, too close to Kepa, tipped over. Handball claimed from the corner, then Walcott crosses for Mina 2 yards out but Mina fies over and Walcott was ofside.

At the other end, a brilliant ball forward, Willian nipped in ahead of Pickford and drove the ball wide. His cross back saw Mina tangle with Morata, clains for a corner.

A spell of massive pressure from Chelsea, another corner, hard shot deflected up and very difficult for Pickford to push behind.

Berenard had another fantastic chance but got the ball all tried up in his feet, Hazard set Willian free down the right, and his shot whizzed just inches beyond Pickford's post. Hazard then lashed a shot for Pickford to parry away for a corner. Time for the first subs on each side, before Alsonso's shot clipped the face of Pickford's far post.

Walcott had a good run but pushed it too far for Coleman. Another ferocious Chelsea attack down the Everton left ended with a goalkick. Lookman tried to beat Azpilicueta but was penalized, and Chelsea were on the attack again, pushing the Whites deep into their area, Morata finishing well from close range but he had strayed offside.

Richarlison got a rare chance to turn and run, Kovacic clipping him and Richarlison collapsing rolling around and staying down... but no foul. Chelsea broke and another shot was lashed across the Everton goal.

Sigurdsson walked of very slowly, still suffering from that awful first-half takedown. Morata collapses under a challenge from Keane but Morata was judged (wrongly?) offside. Everton tried to attack but were easily pushed back.

Richarlison was no match for Rudiger in protecting a loose ball and then falling under the slightest touch, exactly ass Richarlison does! Lookman did absolutely brilliant to beat three players but gave Kepa tot much sight of the ball. Mina did not get on the first corner, Loookman played the second one short and Digne's cross was blocked out as Barkley came on to resounding boos from the travelling Evertonians.

Gomes released Richarlison, but Rudiger again totally had the measure of him, shepherding the ball out for a goalkick. At the other end, an awful shot from Barkley goes well wide.

Azpilicueta was finally called for impeding Richarlison, free kick wide right from Digne, horribly overhit, another opportunity squandered. Another free-kick when Morata fouled Jagielka, with Richarlison down, holding his groin... wasting time? holding his groin. Calvert-Lewin was readied to come on after an unnecessarily long stoppage. Everton running the clock down Somebody booked for time-wasting?

With 5 added minutes, the fans enjoyed seeing Barkley needlessly scoop a pass ahead of his teammate and out of play. Then he was easily dispossessed in midfield.No urgency for Everton once they won a free-kick that Mina launched long and wide right. But the zest had now gone out of the game, heading for a draw.

Calvert-Lewin got a chance to run onto a ball but once again Rudiger had no problem stopping him, Chelsea attacking and winning a last-minute free-kick that Calvert-Lewin cleared with a defensive header and the ball eventually went dead, Friend blowing time on a very competitive game, Everton doing very well to resist some really determined Chelsea attacks, but simply too naive in attack to really make the Pensioners suffer.