Dogged Everton take a point at the Bridge 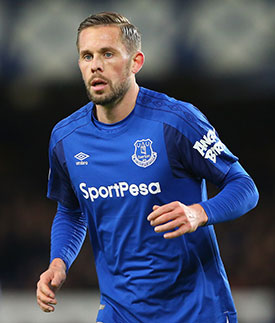 Everton ground out a hugely creditable draw, keeping Chelsea's much-vaunted attack at bay with a committed performance in West London.

The Blues had a number of close calls, not least when Marcos Alonso struck the post in the second half, and Jordan Pickford was called upon to parry away a couple of strong shots but they largely frustrated their hosts in what was at times a testy and bruising affair.

Jorginho escaped what could have been red card with better officiating and Alonso was also fortunate not to be censured for a poor tackle on Theo Walcott while Yerry Mina was very harshly booked for what appeared to be a fair tackle on Eden Hazard.

Richarlison was passed fit to play despite not training on Thursday following the knock he picked up against Brighton last weekend but the Brazilian would fail to finish the game. He was substituted in the final few minutes with an apparent groin strain and Sigurdsson was also forced off in the second half after being scythed down by Jorginho earlier in the contest.

The Icelandic international had Everton's only shot on target, a trademark dipping drive from outside the penalty area, but that statistic belied the bright moments Marco Silva's side had as they largely went toe-to-toe with the only unbeaten side left in Europe's top five leagues.

André Gomes headed high and wide from an early corner before Yerry Mina, on his full debut, had a half chance from a free kick but the ball was just glanced away from him as he closed in on goal to meet the delivery from the left.

Then, after Seamus Coleman's cross had been deflected behind, a corner was cleared to Bernard on the edge of the box but his crisp half-volley flew narrowly wide of goal.

Chelsea were forced to wait for their first genuine crack at goal and it arrived in controversial circumstances in the 21st minute when Mina executed what looked to be a perfectly legal tackle on Hazard just outside his area but was not only whistled for a foul, he was booked as well. Justice was done, however, when Alonso pinged the resulting free kick just wide.

Alonso was the man carrying the threat for an otherwise well-marshalled Chelsea side when he popped up on the far side of the area to meet Willian's free kick but his powerful volley was beaten away by Pickford.

A coming together between Bernard and Anton Rudiger in first-half stoppage time provided another contentious moment, the German defender going down clutching his face following an off-the-ball incident with the diminutive winger. Both players ended up going into the book.

Chelsea came out of the half-time interval very much on the front foot and that set the tone for much of the second period. Pickford had to dive to his right to deny Alvaro Morata within a minute of the restart but Theo Walcott had a great chance two minutes later at the other end, only to let Sigurdsson's terrific ball over the top get away from him with a heavy first touch.

Then, after Kepa in the Chelsea goal had palmed Sigurdsson's drive over, Willian looked to be in for the home side but his touch took him away from goal. His eventual cross was aimed at Morata who went down in a tangle with Mina but referee Kevin Friend waved away the penalty appeals.

Bernard should have done better with Sigurdsson's excellent cross from the right but he rushed his attempt to centre the ball again when he had time to control it near the byline and it bobbled out of play.

Chelsea then took over from an attacking point of view, Willian springing the offside trap again and then dragging his shot across goal and inches wide of the far post, Hazard forcing another parried save from Pickford and then prompting a moment of panic for the Blues goalkeeper when he flapped a deflected effort by the Belgian over his crossbar.

Alonso then raked a first-time shot from the angle off the base of the post, Morata put the ball in the net but was flagged for offside and Hazard got in behind the back four himself before stabbing wide with just Pickford to beat.

For Everton, Ademola Lookman came on for Bernard and produced a stunning piece of skill late on that forced a corner but despite the presence of Mina in the opposition box, the Blues couldn't force another effort on goal.

Phil Jagielka came on for Sigurdsson as Silva went with five at the back to close out the draw, something his charges were successfully able to do.

The draw, Everton's first on Chelsea's ground since the 3-3 thriller under Roberto Martinez in January 2016, keeps the Toffees in ninth place but extends their recent run to just one narrow defeat in their last six games going into the international break.