Digne at the double in Boxing Day romp 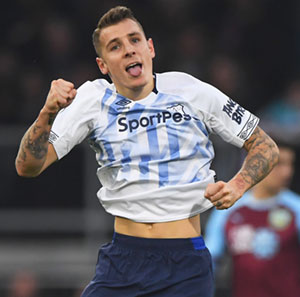 Everton responded to Sunday's mauling by Tottenham to put five past Burnley and record their biggest away win since 1985.

Yerry Mina scored his first Premier League goal to set Marco Silva's men on their way inside two minutes, Lucas Digne added two fine strikes in either half while Gylfi Sigurdsson scored from the spot and Richarlison came off the bench to put the icing on the cake in stoppage time.

Having shipped six goals at Goodison Park three days ago, Silva reverted to the central defensive trio he had deployed in the last away game at Manchester City and the restoration of Mina to the side paid dividends almost immediately.

Everton reclaimed possession after an early corner was cleared by the home side, Bernard swung in a teasing cross from the left and found Mina unmarked in the centre where he headed home the club's 7,000th top-flight goal.

The Blues then doubled their lead in the 13th minute when Dominic Calvert-Lewin, leading the line again well with his physical presence, was taken out by Matthew Lowton handing Digne the chance to reprise the beautiful free kick he scored against Watford earlier this month.

The Frenchman duly stepped up and swept a curling left-footed shot inside Joe Hart's right-hand post.

Keeping his place in the side, Theo Walcott would cause Burnley plenty of problems all afternoon with his running and some neat touches, none more so in the 16th minute when he brought Mina's ball down superbly to turn his marker but was unfortunate not to be awarded a free-kick right on the edge of the opposition box when appeared to be bundled over illegally.

After James Tarkowski had scrambled back to deny the lively Bernard with a saving challenge, Everton were awarded a penalty by referee Michael Oliver for handball by Ben Mee. Despite missing from the spot against Watford, Sigurdsson took responsibility for the kick and sent Hart the wrong way to put the visitors into an unassailable 3-0 lead. It was the fastest the Blues had built a 3-0 lead in the Premier League in 22 years.

Sean Dyche's men threatened to make things uncomfortable, though, when they scored a scrappy goal to pull one back 10 minutes before half-time. Tarkowski was left open at the back post at a corner and while his close-range header was blocked by Michael Keane on the line, the ball fell to Ben Gibson who prodded it home through the melee in the six-yard box.

It was Burnley's first attempt at goal and they threatened to score again early in the second half. A 49th-minute free-kick was only partially cleared by the Everton defence and when the ball was sent back in to Tarkowski free in front of goal, he put the ball over the bar with just Jordan Pickford to beat.

Silva's side resumed control after that. however, and after Walcott flashed the ball across the face of goal, Seamus Coleman's cross-cum-shot was blocked behind and Keane planted a header narrowly over, Digne scored Everton's fourth.

Walcott had been alive to Sigurdsson's defence-splitting pass as the Burnley defence stood still but Hart foiled the winger as the tried to take the ball around him. The resulting corner was initially repelled but Bernard squared it to Digne 30 yards from goal and he rattled the ball into the far corner with an exquisite strike.

Mee raked a shot across Pickford's goal and Johann Berg Gudmundsson drifted a late free kick over as the Clarets tried to rally into the close but it was left to Richarlison to send the travelling Blues home with one more goal to savour in the final minute of added time.

The Brazilian was threaded in by Sigurdsson and he took one touch before stabbing an early shot with his left foot that flew into the bottom corner before Hart had time to fully react.

The result represents only Everton's second away win of the season and their biggest margin of victory since January 2017 but it was an almost perfect reaction to their pre-Christmas horror show against Spurs. It lifts the Toffees back into the top half of the table and gives them something to build on in the final match of 2019, a trip to the south coast to face Brighton.