Digne: We're building something at Everton 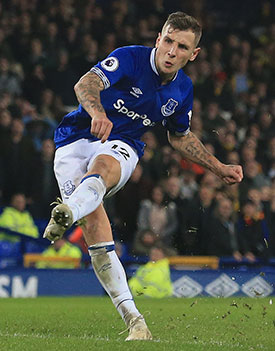 Lucas Digne says with fresh competition in the squad, Everton can improve on last season's eighth-place finish if they can get off to a strong start in the Premier League.

The Blues were disappointed to only come away from their season-opener at Crystal Palace with just a draw but they picked up a point nonetheless and go into their first home fixture of the season in confident mood despite being depleted by injuries and a suspension in midfield.

Marco Silva's men face Watford without Morgan Schneiderlin, who was sent off at Selhurst Park last Saturday, and Fabian Delph who hasn't yet fully recovered from a muscle injury sustained in pre-season, while André Gomes's ability to start is unknown due to the ankle knock he picked up against Palace.

Nevertheless, with seven summer signings in the door, Digne is confident of Everton's medium-term prospects.

"We have a big ambition this year. We are building something," the French international told Sky Sports News. "We started last year with some new players and now we [also] have [more] new players coming in. They help us.

"We are building something to be better and better. I think we can do something this year."

"Of course. When you look at last season, we finished well and we played well against the biggest teams. I think we can do something this year. If we start better than last year maybe we can finish [higher].”

Digne stressed the importance of making Goodison Park an intimidating place for opposition teams to come which Silva had managed to do during a season run-in last term that saw the Blues keep five successive clean sheets at home, with four of those games coming against top six sides.

"It is important to win at home and build a fortress at Goodison because it is our stadium," he continued. "It is an amazing place to play."

"Everybody is excited to play their first home game of the season at Goodison. It is the best place for playing football. The atmosphere is amazing."

Digne scored a stunning free-kick goal against Watford in this fixture last season to rescue a point in dramatic fashion at the end of a match that had not gone to plan for Silva's men.

He would score twice at Burnley on Boxing Day in a 5-1 romp that included a near carbon-copy goal from a dead-ball situation as the one he scored against the Hornets but he says that first strike in Everton colours was particularly memorable.

"It was the best personal moment in my career,” he said. “It was my first goal at Goodison. It was mixed [emotions] because I was disappointed with the result. But I was so happy with the goal."

Digne lost one compatriot as a club team-mate over the summer when Kurt Zouma returned to Chelsea following a successful season-long loan with the Toffees but gained another in the form of Djibril Sidibé.

Also a French international, the 27-year-old arrived on loan from Monaco on transfer deadline day to compete for a place on the opposite side of defence with Seamus Coleman.

"He looks to get forward and cross the ball, he has a lot of quality and I think he will prove that in England. He is a very good player and he is my friend," he added.

"I have known him since Lille and we have grown together and I played with him in the national team too, so it is always a pleasure when you can play with our friends. I am happy he is here."

I say that with no disrespect to Lucas whatsoever, but come on, 'Fortress Goodison' and we are retrospectively acknowledging narrowly avoiding what would have been, the double by Watford over us.

Don't get me wrong Watford are a fairly decent side, but they're not a Man City, Spurs or whatever.