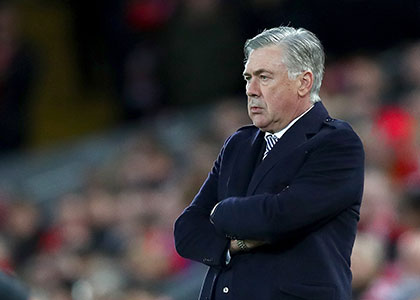 Everton were handed an FA Cup third-round gift by Jürgen Klopp's much-changed team selection but squandered it with a dreadful display at Anfield that saw them deservedly dumped out by yet another Anfield derby defeat.

The German responded to the glut of fixtures on his calendar by fielding six second-string players, most of them teenagers and one of them, Curtis Jones, came up with a top-drawer goal with 20 minutes to go which proved to be enough to overcome a Blues side that had descended into a directionless shambles by the closing stages.

Starting with a largely unchanged XI themselves, with Morgan Schneiderlin coming in for Tom Davies and Theo Walcott replacing Fabian Delph, Carlo Ancelotti's team were, predictably, the more threatening side going forward in the first half and forced three saves from Adrian inside the first half hour.

A terrific ball by Gylfi Sigurdsson found Walcott in the box in the sixth minute and he was able to hold the ball up for it to be knocked back to Dominic Calvert-Lewin but the goalkeeper saved with his feet.

Five minutes later, after Calvert-Lewin was fouled by Philips, Mason Holgate beat the offside to claim a free header but he put it straight at Adrian who beat it away.

Then, Walcott got to the byline down the Everton right and cut it back to Richarlison in the middle but again the keeper was there to kick the shot away to safety while another Walcott cross a few minutes later was just an inch or two too far ahead of Calvert-Lewin's diving header.

The hosts' best chance fell to Divock Origi later in the half, although he might have had any goal chalked off for offside, when he screwed a shot across the area searching for the far corner but Jordan Pickford palmed it wide at full stretch.

Morgan Schneiderlin swept a decent chance to test Adrian from 20 yards over after Djibril Sidibé's lay-off following a corner but that was as close as Everton would come to threatening Liverpool's goal until substitute Moise Kean sliced a volley over the bar in injury-time.

In between, Liverpool's raw side, bolstered by the introduction of the more experienced Alex Oxlade-Chamberlain, simply grew in confidence as Everton's weak showing spurred them on and, after Pickford had been forced to save from Williams and then push a long-range Origi shot away, Williams scored the winner.

Collecting the ball following strong work by Origi just inside the Blues' box, the youngster picked his spot with a curling effort that clipped the underside of the crossbar and bounced in past Pickford's fingertips.

Oxlade-Chamberlain prompted another low save from Pickford but the one goal was all that was needed in the face of a pitiful second-half display from Everton who were condemned to their second Merseyside derby cup defeat on this ground in the space of three years.