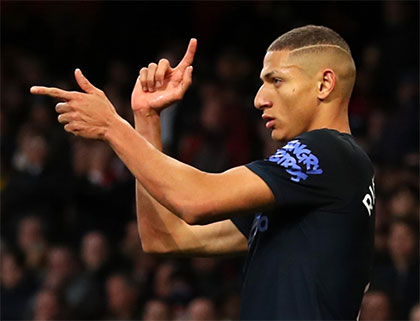 Everton were left counting the cost of some slack defending at one end and missed chances at the other as they fell to familiar defeat at Arsenal.

The Blues haven't won on the Gunners' home turf since 1996 but they put themselves in a great position to end that sorry sequence when Dominic Calvert-Lewin scored with less than a minute on the clock.

It proved to be too much soon, however, and just the catalyst that Mikel Arteta's improving side needed to turn the game on its head to lead 2-1 heading towards half-time.

Just as they did at Watford earlier this month, however, the Blues levelled things up at 2-2 with a goal in first-half stoppage time but they succumbed to a quick strike within 60 seconds of the start of the second half that eventually proved to be crucial as Calvert-Lewin couldn't convert with a couple of gilt-edged chances.

Carlo Ancelotti made a number of changes to the side that had started against Crystal Palace, one of them enforced by injury to Lucas Digne that saw Leighton Baines come in as skipper while Seamus Coleman dropped back to the bench to accommodate Djibril Sidibé's return to the starting XI.

Mason Holgate also returned to partner Yerry Mina, Alex Iwobi replaced Bernard and Fabian Delph was drafted back in following his one-game ban as Theo Walcott was sidelined by the knee injury he picked up in the last game.

Arsenal didn't even get a chance to see how Ancelotti had setup up his somewhat unorthodox team selection before the visitors took the leas. Danny Ceballos fouled Richarlison in dangerous area with just 17 seconds on the clock and when David Luiz could only head the resulting free-kick into the air, Calvert-Lewin pounced on it opportunistically with an acrobatic backwards finish off the outside of his boot.

Arsenal responded in predictable fashion and Shkodran Mustafoi headed a corner over the bar before Arteta's team started to pick holes in Everton's defence. Nicolas Pepe was picked out in space wide on the right but his attempt to curl a shot around Jordan Pickford was weak and easily saved.

An injury to Sead Kolašinac midway through the first half proved to be a blessing in disguise for the Gunners, however. The Bosnian international was replaced by Bukayo Saka and the teenager wasted little time in serving up the equaliser for Eddie Nketiah. The former whipped a cross in from the left and the forward steered a side-foot finish past Pickford to make it 1-1 with 26 minutes gone.

Six minutes later, Arsenal were in front. Increasingly targeting Djibril Sidibé's positional weakness down their left, the hosts profited down that route with Luiz threaded a ball between the French fullback and Yerry Mina that put Pierre-Emerick Aubameyang into the clear where he calmly slotted past Pickford.

Richarlison's wayward header a minute before the end of the regulation first 45 minutes appeared to be Everton's last chance to reclaiming parity heading into the break but when Sidibé's charging run forced a late corner, the Blues plundered an equaliser of their own.

Mina caused havoc in the Arsenal box with a backwards header that dropped in front of Bernd Leno and Richarlison managed to get a toe on it ahead of the goalkeeper to prod the loose ball over the line.

That platform was ruined, however, when Aubameyang scored again at the start of the second period. A cross from the left this time found the Gabonese striker unmarked in the box and he headed home from around six yards out to make it 3-2.

Everton would have their chances as they tried to stretch the game and capitalise on any fatigue creeping into Arsenal's game following their trip to Olympiakos in the Europa League on Thursday and twice Richarlison almost found Calvert-Lewin with a rolled centre from the left having sprinted onto passes down the left channel.

On both occasions, the Englishman was an inch away from converting and he was foiled twice more by Leno, the first when he shot rather tamely at the German rather than lay it square to Sigurdsson and the second when the ball dropped at his feet just a few yards away from the goal line but the keeper did well to make a point-blank stop.

And Arsenal had Leno to thank for making an excellent stop with his foot to deny Richarlison with 12 minutes to go and then racing out of his area to clear the ball away from the Brazilian after André Gomes, making a sublime return from his long injury lay-off as a second-half substitute, had searched him out with a brilliant forward pass.

Arsenal were having less of things their way going in the opposite direction but when Pickford dropped a clanger and played Sigurdsson into trouble, the keeper was almost punished but Nketiah slammed his shot off crossbar.

Calvert-Lewin had one more chance for Everton in injury time after Sidibé had won another corner but when the ball came back out to Bernard, the striker could only nod his cross inches wide of the far post.

Afterwards, Ancelotti was encouraged by Everton's attacking endeavours but lamented his team's sloppy defending, admitting that you can't expect to concede three goals and come away with any points.

In terms of the Blues' European aspirations, it was a damaging defeat as it drops them out of the top half of the table again with three more difficult assignments to come in a row against the so-called “big six”.