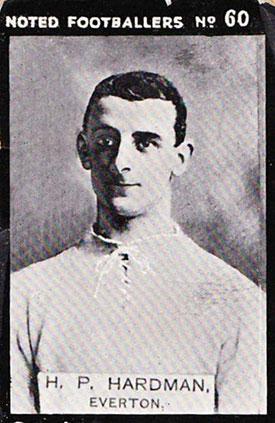 Harold Hardman left an indelible mark on both Everton and Manchester United, as player and figurehead respectively. At Goodison Park, he was an enterprising left-winger in the early years of the 20th Century, and a key part of our first FA Cup-winning team. Nearly 50 years later, he helped to steer Manchester United to greatness and handled adroitly much of the aftermath of the Munich Air Disaster. His story has now been told in a new biography penned by two Manchester United experts.

Manchester-born but Blackpool-raised, Harold was 21 when Everton poached him from his adopted hometown club (he also turned out for the noted amateur club, Northern Nomads). His Blues debut was at Goodison in the first game of the 1903-04 season against Blackburn Rovers. The slightly built wide-man got off to a flying start: raiding down the wing, pinging in dangerous crosses and scoring in a 3-1 victory.

Athletic News reported: “Settle and Hardman were in a class to themselves, and the latter never seemed satiated with work: he could not get the ball too often, and what is more, he made good use of it when in possession.”

He would form a devastating attacking partnership with Jack Sharp on the right wing, Jimmy Settle at inside-left, and Sandy Young at centre-forward. After several silverware near-misses, he won FA Cup by helping the Toffees to overcome Newcastle United in the 1906 final.

Harold followed his father into the legal profession and had to absent himself from some Toffees matches in order to study and sit exams. As an amateur player, he was invited, by letter from Club Secretary Will Cuff (who was also in the legal profession) to appear in matches – responding in the affirmative when he was available. The pair would strike up an enduring friendship; for many decades Harold would keep the letters that Cuff sent him – always beginning with, “My Dearest Harold”.

The outside-left played four times for England and won Olympic gold in football for Great Britain in the summer of 1908. At this point, he had recently left Everton after more than 150 appearances, he’d throw in his lot with Manchester United later that year. The Red Devils were more conveniently located for his legal practice than the Toffees but, with first-team opportunities limited, he would soon move on to Bradford City before finishing his playing days with Stoke City. Remarkably, he joined the Manchester United board whilst still turning out for the Potters.

After the First World War, he would combine his legal business interests with football administration. He rose to the position of Chairman of Manchester United in 1951 – backing Matt Busby as he pieced together the famous ‘Babes’ side. In the wake of the 1958 Munich Air Disaster, Harold was a calm and experienced figurehead, guiding the club through the most difficult of times.

Weeks after seeing Man Utd win the 1965 League title, he passed away at the age of 83. In his time at Old Trafford, he had seen Billy Meredith, George Best and other greats in-between. His grave in Sale Cemetery fell into a state of neglect and disrepair over the years. However, in 2014, it was restored by a group of Manchester United supporters – a fitting tribute to a hero for these two great Lancastrian clubs. 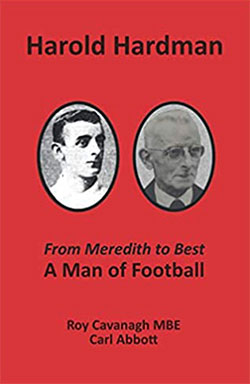 Now, two Manchester United history aficionados have come together to produce the biography that Harold is so richly deserving of. Roy Cavanagh MBE has previously chronicled the story of the football and cricketing greats Jack Sharp and Harold Makepeace (formerly of this parish). With Carl Abbott, he has written the life story of former Everton boss Johnny Carey. The fruit of their latest collaboration is titled Harold Hardman: A Man of Football. It covers all aspects of Harold's long service to the sport. It can be purchased through Amazon for £8 via this link.

Dennis Stevens
2 Posted 15/01/2021 at 19:23:17
Everton seemed to be somewhat in the doldrums after the War, Somebody Like Hardman would have been a great addition to the Board. What a shame he was Manchester-based.
Michael Kenrick
3 Posted 16/01/2021 at 11:51:07
That's one of those classic "What if?" questions, Dennis. You can't waste too much energy on answering them but it's not unreasonable to wonder what he might have been able to do for Everton if he was on the board in a period where the club finished bottom of the table, suffered relegation from the top flight (1951) and then struggled, hitting our lowest-ever finish – 16th in the Second Division (1953).