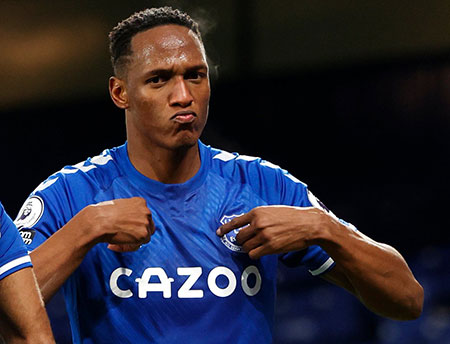 Everton moved into second place for the time being and deepened the gloom surrounding Mikel Arteta with a narrow 2-1 win at Goodison Park under-pinned by another resilient defensive display.

A Rob Holding own goal and Yerry Mina's header on the stroke of half-time put the Blues 2-1 at the interval after Nicolas Pépé had levelled from the penalty spot and though Carlo Ancelotti's side ceded the majority of the second half to the visitors, Arsenal couldn't find a way through despite some concerted late pressure.

With Allan out injured, Ancelotti turned to Tom Davies as Abdoulaye Doucouré's partner in midfield and Jordan Pickford came back in in goal as the only changes from the team that won at Leicester and after a very quiet opening spell, Everton went very close with a quarter of an hour gone when Michael Keane unloaded from 30-plus yards and just missed with a raking shot.

The home side did take the lead seven minutes later, though, when Alex Iwobi profited from space on the right against his old club to whip in a cross that Dominic Calvert-Lewin glanced on and the ball was diverted in by Holding's out-stretched leg.

Arsenal refused to buckle, however, and they restored parity 10 minutes before the halfway stage. Bed Godfrey's pass was cut out down Arsenal's right and when the ball came into the box and Mina's stooping header only got as far as Ainsley Maintland-Niles, Davies clumsily tripped the Gunners' wing-back just inside the box.

Pépé stepped up to calmly slot home the resulting spot-kick to give Arteta's beleaguered men some confidence for the remainder of the contest.

They found themselves in arrears again as the game headed into first-half stoppage-time as Everton's threat from set-pieces was pressed home again. After Bernd Leno had made a flying save to deny Calvert-Lewin, Gylfi Sigurdsson swung a corner in to the near post where Mina met it with a smart run and nicely-directed header past Bernd Leno on the goal-line.

The second half was all about game management for Everton who dared Arsenal to break them down which they almost did in the 54th minute when Pickford flapped at a cross and the ball fell to David Luiz who fired into the ground and off the crossbar.

Everton forays forward were rare but Ben Godfrey sped down the left and almost found Calvert-Lewin in the centre while Richarlison also came close to connecting with Alex Iwobi with another good run to the byline before Iwobi lined up a half-volley from a corner that was deflected behind.

Jopseh Willock came off the bench for Arsenal and headed just wide from Maitland-Niles's cross with four minutes gone and as Ancelotti wound the clock down with three late substitutions, Pickford came up with a strong one-handed stop to push Bakayo Saka's low shot away to safety and help ensure the three points went to Everton.