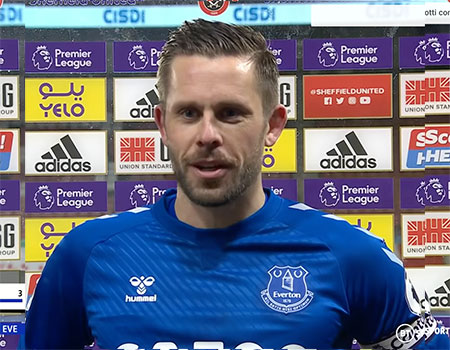 Gylfi Sigurdsson says that he scored the winning goal at Sheffield United when he was supposed to be playing more as a defensive midfielder.

The Icelandic captain popped up in the box to fire the only goal of yesterday's rain-soaked clash at Bramall Lane and put Everton into second place in the Premier League leading into the final game of the year.

Sigurdsson had played his usual attacking midfield role until André Gomes was introduced with 15 minutes to go whereupon the Blues' No.10 was supposed to drop back into a more withdrawn role.

However, having spurned a great chance to score the decisive goal at Burnley at the start of the month, Sigurdsson arrived in the box at the crucial time to slot Abdoulaye Doucouré's lay-off after a deft touch from Bernard and condemn the Blades to another defeat.

“The gaffer actually had just moved me to defensive midfield so I'm not sure what I was doing in the box but it was a nice to get the ball," he told BT Sport afterwards.

“Obviously, Bernie's brought it down wonderfully for Doucs and he set me up for a nice little tap in.”

Carlo Ancelotti also admitted that scoring the winner wasn't part of Sigurdsson's brief after he had withdrawn the impressive but more defensively-focused Tom Davies in favour of André Gomes with 15 minutes left.

“Football is a little bit strange,” the Italian said with a smile. “When I put André Gomes in, I put [Gylfi] in a little bit back but he found the solution.

“I think it was good play from Bernard and Doucouré and Sigurdsson shot well.

“I think the key point was that we defended well. We didn't play so well with the ball but defensively we we were strong, we were solid and we concentrated and at the end we found the opportunity to score a goal and these three points are really important for us.

“We feel good [to be second in the League] because we have problems at this moment. We have important players out but this team has a lot of spirit and I am really pleased to manage these players.

“I'm really happy because I found the right club, a family club with a lot of support behind us. After one year, I can say I was lucky.”

Think back to that cracking effort at Leicester albeit 2 years ago as an example of what he is capable when encouraged to get around the edge if the box and strike from distance.

We all know a lot of the criticism has been justified but he never set the silly fee Koeman paid or his high wages. I think his workrate has been good and, against Man Utd in the cup, he played very well and gave his all.

John Davies
3 Posted 28/12/2020 at 00:15:38
To sound like a school report. "Could do better if he tried" Because when he does make the effort he really is a class player.
Dale Self
4 Posted 28/12/2020 at 14:19:19
He was the centerpiece for the two systems that brought him success. While not gifted with speed he is a different kind of playmaker that will morph into a 2nd half box threat
Sukhdev Sohal
5 Posted 29/12/2020 at 21:14:54
Can fans please stop abusing Gylfi? The only season he has played poorly here is when he was forced to be a central defensive midfielder because we had no-one else. He has the quality to be an Everton player, unlike Iwobi for example.

He is 31 so don't expect him to be the perfect box-to-box but, if he can keep on getting goals and affecting the game positively, that left centre-midfield position should be his for now.

Jerome Shields
6 Posted 29/12/2020 at 22:34:41
Soggy has played well in the last three games, really getting involved and being relevant to the tactical formation of Everton. Before this he wasn't and would become anonymous.

Maybe it is Ancelotti coaching. Soggy is more on top of his brief and has become more confident. The goal was the resu!t of a p!ayer being on top of his game.