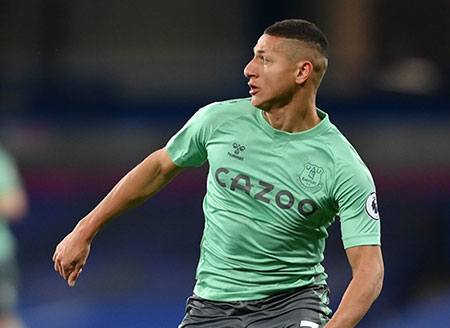 Everton's long unbeaten run away from home came to an almost predictable end at Stamford Bridge where a full-strength Chelsea ran out comfortable winners over a Blues side missing some key pieces.

No Toffees team has won on this ground since 1994 and an end to that sorry record never looked in sight as Thomas Tuchel's men took control of the contest from the outset and never let go.

With Carlo Ancelotti missing Abdoulaye Doucouré, Yerry Mina, Seamus Coleman and James Rodriguez through injury and only able to name Tom Davies on the bench following a knock of his own, it was always going to be difficult for Everton, although they largely failed to do themselves justice in what was a one-sided affair.

Though the home side dominated the ball, they didn't come close to troubling Jordan Pickford until a quarter of an hour gone when Jorginho's volley off a headed clearance from a corner skidded a few feet wide of the post.

Everton's first real of pressure around the 25th-minute mark ended with a fairly tame header by Dominic Calvert-Lewin and Lucas Digne fired a direct free-kick off the top of the wall after Richarlison had won a foul on the edge of the box but they fell behind just past the half-hour mark.

The understanding between Alex Iwobi, deployed in a right-wing role, and Mason Holgate, playing on the right side of a central defensive three, broke down badly allowing Callum Hudson-Odoi to break into space behind them, feed Marcos Alonso and when Kai Havertz tried to steer the Spaniard's cross home, the ball hit Ben Godfrey and bounced past Pickford to make it 1-0.

Alonso came close to doubling the lead when he was put clean through with a ball over the top by Andreas Christensen but Pickford did superbly to deny him with a one-handed save, while André Gomes had a low shot from 20 yards comfortably saved by Eduard Mendy on the stroke of half-time.

Just a goal down at the break, Everton were very much in the contest but needed to be bolder going forward if they were to get back into it in the second half. They weathered an early storm when Havertz controlled Hudson-Odoi's chip and fired past Pickford but his goal was disallowed for handball, Reece James dragged a shot across goal and Pickford Hudson-Odoi himself by palming his rasping shot over the bar.

In between, Everton's best move of the game thus far came via Davies who had replaced the ineffective Iwobi in the 56th minute. The substitute fed Gylfi Sigurdsson who then found Richarlison but the Brazilian's sliced his shot horribly wide when he should at least have hit the target.

With 63 minutes gone, Havertz was played in behind the Blues' defence and was felled by Pickford who had little option but to attempt to take the ball off his feet, handing Jorginho the chance to make it 2-0 from the spot. The Brazilian sent the keeper the wrong way and effectively killed the game.

Ancelotti replaced Sigurdsson with Josh King and then Gomes with Bernard and the visitors came out of their shell a bit in the closing stages without ever threatening to affect the scoreline.

Instead, it was left to Pickford to ensure the margin of defeat didn't get any bigger, denying Timo Werner after he had rolled Godfrey and then pulling off an impressive double-save to keep first the German out and then N'Golo Kanté. Substitute Mason Mount had one more decent effort from distance that Pickford pushed away before referee David Coote called time on Everton's first defeat on the road since the start of November.