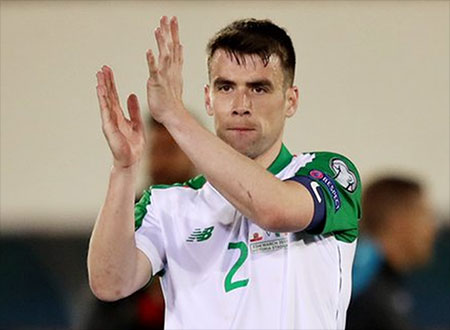 Seamus Coleman returned to international duty and captained the Republic of Ireland in Belgrade where they were beaten 3-2 by Serbia in their first Group A fixture of 2022 World Cup qualifying.

The Irish got off to an ideal start and gave boss Stephen Kenny hope for a first win when Alan Browne put them ahead in the 18th minute but Dusan Vlahovic equalised shortly before half-time.

The Serbs, with Ajax and former Southampton star Dusan Tadic in dominant form, then took the lead themselves through Aleksandar Mitrovic and the Fulham striker increased the hosts' lead later in the second half.

James Collins scored four minutes from the end but it was too little too late.

Meanwhile, Lucas Digne was an unused substitute as defending champions France were held to a 1-1 draw by Ukraine.

The 38-year-old was meant to be the reserve keeper behind André Onana at Ajax. But Onana was caught dipping into his pregnant wife's pharmacy cupboard, and has been given a year's ban.

Stekelenburg has been doing fine as the stand-in, when Ajax have disposed of the French and Swiss league leaders in Lille and Young Boys in the last two rounds of the Europa League.

Davy Klaassen has re-found his former form at his old club, also Ajax. He has a new nick-name given by his club's fans: 'Mr 1-0' as he has the knack of scoring the, yes you guessed it, the first goal.

He did the same too last night, coming on as a sub against the Turks. Turkey were already 3-0 up against a toothless Dutch side, and only when Klaassen gave it a go, did something happen. Within 5 minutes it was 3-2, with Klassen amongst the fray when Luuk de Jong headed in the second. Turkey were gifted a penalty to take it to 4-2.

Worst man on the pitch: Michael Oliver. The English referee was even worse than most Dutch players, making it more than an up-hill struggle for the Dutch.

If anybody thinks Fifa still has any money left after their corrupt shenanigans, they are mistaken. For the coming World Cup qualifiers, there is no VAR and no goal-line technology. Really ridiculous, and the latter may have cost the Dutch a goal.

I know it's not an easy job, especially with VAR now but between the two they quite often still don't get it right, but some are just SOB's!

I liked Klaassen, he might not have been suited to the English game, especially coming to Everton at a time of major upheaval at the club, but he's still a very good player, little Davy, though.

Probably not fast or physical enough for the English game, but he's got a great touch and great awareness, and it was a shame he never came at a different time because the boy can definitely play!

Really interesting article today on the Dutch and Belgian leagues proposing a merger. That would see the likes of Ajax, PSV and Feyenoord joined by Brugge, Anderlecht and Standard Liege, making a very competitive league with access to arguably Europe's combined best pool of youth talent.

I remember there being similar talk of a "Celtic" league a few years ago combining the Scottish, Welsh and Irish leagues. But I hardly think that compares. Given any half-decent sized Welsh club already plays in the English league, it would still be a Celtic-Rangers dominated affair.

Christy Ring
9 Posted 25/03/2021 at 21:06:40
Just like to comment on Seamus, seeing the heading was about Seamus and Ireland. We had a very young inexperienced team because of injuries, and our Captain Seamus led by example, but Tadic and Mitotic were the difference.
Brian Hennessy
10 Posted 25/03/2021 at 22:29:41
I thought Seamus was excellent last night. He played on the right hand side of a back 3 and his good passing into midfield helped Ireland to put some good moves together.

I know we didn't win, but I saw enough last night to suggest Ireland have turned a corner. A new style of proper passing football in comparison to the dross served up by our last few managers.

We need to give Stephen Kenny time to build a team for the future.

Shane Corcoran
11 Posted 26/03/2021 at 09:43:36
Good to see that the vast majority of Irish fans are on the side of Kenny after the past 15 odd years of knock it down the channel, chase it for us please Shane Long and see if we can get a throw-in.

We've a hugely average and inexperienced squad available but I'd watch that performance twenty times before watching Trapp or O'Neill again.

But as far as lucky managers go, Stephen is rooted to the bottom of the table.

Heart, desire, maybe that's where he lost his belief at Everton?

Good luck to the lad, and arguably he came to Everton, unfortunately at the wrong time and with a manager who couldn't really be bothered who put more effort into flying to Spain to play golf, at most given opportunities.

Lessons learnt for all.

Coleman played well in an unusual and unfamiliar position but Doherty his 'heir', occupied a favoured wing back roll but was very disappointing.

The main difference lacking from what and how Northern Ireland played is the lack of a co-ordinated team press and effort closing players down in unison. It reminds me a little of Everton. To easy to play through and dictate.

Happy to give Kenny more time to develop the general play and bring through the next generation.

Tadic ran the show, he's matured into a top talent and they also scored a coupe of really good goals.

As for Klaassen, most can see the talent but also his weaknesses. Just like Gomes, the lack of forward attacking options at Everton doesn't help. It leads to playing the ball backwards or getting closed down quickly and dispossessed.

Hopefully all addressed this summer with a Hazard type signing.