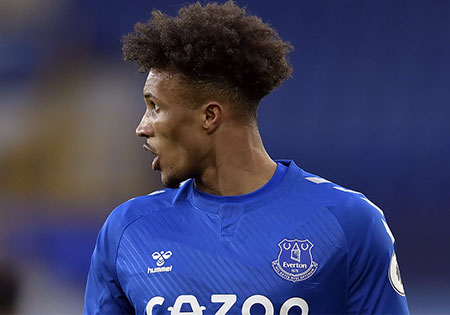 Jean-Philippe Gbamin has received the welcome news that the knee injury he suffered during training over the weekend won't require an operation.

There were fears that the 25-year-old had sufficiently damaged the medial ligament in his knee when Lucas Digne accidentally fell on him during a practice match at Finch Farm that it would need surgery.

However, a scan undertaken in London today revealed that he will just need to rehabilitate the injury as normal over the next couple of months with a view to trying to make another comeback at the start of next season.

In his time at Everton since signing from the Bundesliga in the summer of 2019, Gbamin has had to have three surgeries, two to correct a torn quadriceps muscle and another to repair a ruptured Achilles tendon.

He has still only played less than two full games for the Toffees after making a 12-minute cameo against Crystal Palace nine days ago.

However, it won't matter how great or poor a player he is if he gets as much good luck in the next few seasons as he's had bad luck in the last couple. He'll be winning everything in sight & becoming european player of the year in the process!

Go for it, young man.

This season threatens to go into freefall as our injured mount-up. Carlo has managed to keep a lid on injury news as well as severity so who knows if Calvert-Lewin will be back or if he is back, whether he will be playing with a significant niggle. Even if we get the likes of Allan back they will take a few games to get up to speed and time is running out.

It is clear that the squad is too small. Europa League would really put more strain on the club but I suppose qualification might strengthen Carlo's hand in transfer negotiations and budget talks. Personally, I fear something of a meltdown with some tough fixtures lined-up.

Good luck to him and let's hope he can finally put behind what has no doubt been a terrible period for him, both professionally and personally.

He's young enough to overcome; let's get him ready for next season.

I’m a pretty reasonable person and I know injuries can’t helped but Delph really annoys me! I’m think he actually thinks he some sort of star who’s doing us a favour?

His contribution to this club has been zero.

Danny O’Neill
26 Posted 15/04/2021 at 13:35:51
I don't know him and I don't have any evidence to support this Stephen, but I just get the impression of a big time Charlie who talks about his time on the bench at City as if he is some kind of superstar.

Just an hunch, but like I say, I can't back that up.

Alan J Thompson
27 Posted 15/04/2021 at 13:57:58
I don't know what they get upto at training but I have heard Dutch coaches of the Socceroos say that he prefers players even just training in the highest European leagues than those playing in Australia's "A" League.

Perhaps Everton need to have clauses in the contracts of players with previous lengthy injury spells with their other clubs that their salary is reduced, or covered by the player's insurance, if they suffer a similar injury except when incurred in a 1st X1 match. It might save our officials/management from losing face or do their research for them.

Christy Ring
28 Posted 15/04/2021 at 14:06:14
Danny#26 I have the very same opinion, especially after his arrogance when losing to the Liverpool kids in last year’s FA Cup. How many games has he played since, with all his niggly little injuries I don’t think he gives two Sh...
Paul Richardson
29 Posted 15/04/2021 at 15:49:47
Delph must have something,,,Leeds (almost) legend, Villa captain and "mad dog" at City. Question is: Will whatever it is emerge during his time at Everton? It's a waiting game. Fingers crossed, we could have two midfield "crocks" ready for next season, so we only need to buy four world class players rather than six. Big fear is we will anyway overpay for the quartet.
Steven Smith
30 Posted 15/04/2021 at 15:55:09
I defo feel sorry for the lad and hope he can make a fresh start next season.
I do wonder what goes on at finch farm. It was apparently a contact injury in training, when I fail to see much contact from our players during actual games.
Alan J Thompson
31 Posted 15/04/2021 at 17:06:22
Steven(#30); Perhaps there are less moving targets at training which makes for more slow, sorry, late tackles.
Pat Kelly
32 Posted 15/04/2021 at 19:34:35
Gbamin is the new Delph. Now you see him now you don't. Unfortunately, he'll spend most of his time in recovery mode.
Martin Berry
33 Posted 15/04/2021 at 23:30:40
He is going to be a fantastic player for Everton, he is still young and has the physicality to be a hit in the Premier League, but he has been so unlucky.
Remember Peter Reid had previously suffered from two broken legs before he came to us but he worked out ok.
Have faith and give the lad a chance, a despair at some of the naysayers !

Steve Brown
34 Posted 16/04/2021 at 01:31:37
I really hope Gbamin recovers and plays a big part next season, but we cannot rely on that. We need a pacy, energetic midfielder as we are so slow in that department- especially if we can get rid of the dreadful Delph and Sigurdsson in the summer.
Justin Doone
35 Posted 16/04/2021 at 14:18:38
Planning to include any player as an important part of the matchday team or squad that have suffered reoccurring injuries is poor planning and bad management.

What is said to the press may only be for the benefit of those injured players and not necessarily the plans that will be carried out.

At least that's what I'm hoping!

The season is practically over, unless we go on a 5 game winning streak (still stupidly dreaming) I'm more interested in what players we bring in and dispose of in the summer.

Roll on next season..