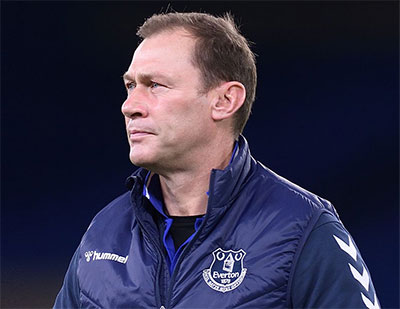 Everton were condemned to a ninth defeat in 14 games as Emiliano Buendia's header off a corner in first-half stoppage time proved enough to douse the fire brought by Duncan Ferguson's return to the touchline as the Blues' caretaker manager.

The Scot, put back in charge following the sacking last weekend of Rafael Benitez, pledged yesterday that Everton's players had been reminded what it means to play for this famous old club but while the Blues brought their fight to this clash with Steven Gerrard's side, they were largely out-classed.

Ferguson's men failed to register a shot on target in the first half and though they improved in the second, particularly when Anthony Gordon and Allan were introduced in place of Andros Townsend and André Gomes, they were frustrated by a feisty and obstinate Villa.

Given come of the contentious selection decisions made by Benitez, there was plenty of expectation around Ferguson's starting XI, one that confirmed his faith in Mason Holgate who came in for the under-performing Michael Keane and saw Jonjoe Kenny preferred to Seamus Coleman at right back. New signings Nathan Patterson and Vitalii Mykolenko were absent from the squad entirely.

As expected, the home side started with plenty of fight but it was effort and aggression that was rarely channelled into constructive, effective play. The visitors moved the ball better and took advantage of the extra man in midfield on occasions, which afforded Buendia a couple of sights of goal from distance, one of which required intervention from Jordan Pickford to palm the ball to the side while the other fizzed wide.

Ollie Watkins had the best chance of the half from open play when he latched onto a ball over Yerry Mina's head but Pickford did enough to put him off and the striker stabbed it wide before the England keeper pushed Philippe Coutinho's header over his crossbar.

It was from that corner that Villa scored, though, with the cruel irony of Lucas Digne, taken off set-piece duty by Benitez before he was sold to the Midlanders nine days ago, providing the telling ball. Buendia beat Richarlison to the near-post delivery and looped a header towards the far corner of the goal off Pickford's despairing fingertips.

Demarai Gray had shown flashes of his talent in the first period and he took charge of a direct free-kick opportunity early in the second but his shot deflected wide off the defensive wall.

It took Gordon's introduction for Everton to carve out their first genuine goalscoring opportunity of the contest just a couple of minutes on the field when he whipped a ball in from the right that Richarlison could only steer high and wide of goal.

Three minutes later on the hour mark, a Richarlison effort was also blocked behind and when Dominic Calvert-Lewin headed the ball back across goal and Ben Godfrey sent a brave header goal-wards, it took Tyrone Mings to head off the line.

That was as close as Everton would come to scoring, although Mina should have done better with a raking Allan cross after he had stayed forward following a set-piece but, unfortunately, he couldn't keep his header down.

Gordon saw a late free-kick break through the wall but saved low by Emiliano Martinez and though five minutes were added due to Villa's time-wasting, Everton were out of ideas and out of energy.

A victory that Ferguson was desperate to deliver to the fans would have give the club some precious time to breathe and assess their next move, with no obvious solutions to the vacancy left by Benitez's permanent replacement.

Instead, another defeat ensures that the danger of a fight for survival in the Premier League still threatens a club that is riven by discontent by supporters, as evidenced by a sit-in protest by a number of fans after the game calling on change in the boardroom and engagement from the owner and a plane flown overhead calling on Chairman Bill Kenwright to stand down.

The hierarchy have more than a fortnight before the next League fixture, a massive game at fellow strugglers Newcastle, to make any move on the manager front but whoever takes the role faces a huge challenge with a squad lacking depth and quality.