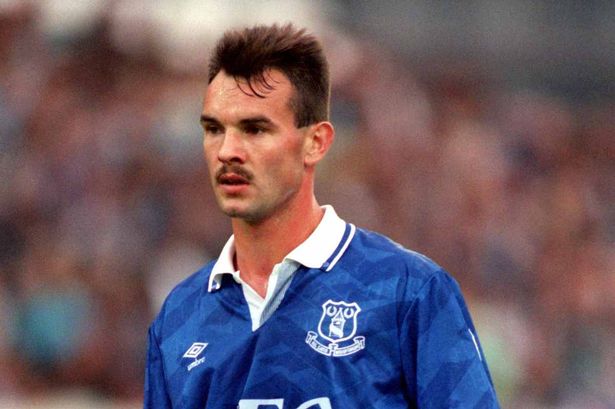 On deadline day in 1998, Howard Kendall turned to an old Evertonian famed for his backflip goal celebrations to help retain Everton's coveted Premiership status in what turned out to be another end-of-season scrap at the bottom of the table.  Beagrie played only a cameo role on his return to Everton, doing little to prove the critics wrong and to wipe away the memory of the injury nightmare that had wrecked two years of his career.

When last at Goodison Park, Beagrie was at best inconsistent in a period when the Toffees struggled emulate their mid-Eighties successes.  Throughout Beagrie's Everton career, the Blues played with a succession of diminutive strikers – men like Tony Cottee, Mo Johnston and Peter Beardsley.  Now, four years after leaving Goodison Park following his first spell with the Blues, Beagrie was hoping to be given the opportunity to try to supply the bullets for Duncan Ferguson to fire.

Beagrie made 138 appearances for Everton from 1989 to 1994, after scoring on his debut against Aston Villa. He was eventually sold by Mike Walker to Manchester City just 10 games after the manager had arrived from Norwich City to make room for Anders Limpar.

Beagrie helped to keep Manchester City in the Premier League after a £1.1m transfer deadline day move to Maine Road in 1994 but he spent most of the 1995-96 season on the treatment table when City slipped into Division One.

Beagrie wanted to show the accusations levelled at his professional integrity that dogged the final agonising months of his spell at Manchester City were wrong.  He admitted to being hurt by claims from former City boss, Alan Ball, that the long-term injury he picked up there "was a problem in his head rather than his knee". He never got the apology he wanted from Ball, even when a specialist finally found a tendon that had ballooned to four times its normal size.

After escaping Maine Road and spending a productive season with Bradford City, Beagrie's return to Everton was hardly been greeted with joy by Everton supporters who wanted expensive players to arrive at Goodison before the transfer deadline.

He had played every game for Bradford before his loan spell, with the main aim of getting himself back into the shop window.  He stayed largely injury free, stronger than ever and didn't put on any extra weight.

Kendall said: "Criticism for bringing Peter back doesn't concern me. He's one of the best crossers of the ball around, and with Duncan Ferguson upfront, that is clearly the reason."

In six appearances for his Everton swansong, Beagrie falied to set up a single goal for Ferguson or anyone else, and he really did little to impress his old fans. After Everton's very lucky final escape, Beagrie returned to Bradford City when his loan expired.