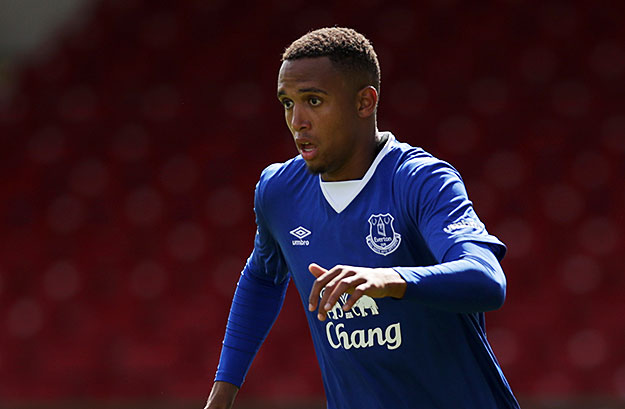 Roberto Martinez's planning for the future in the second summer after he assumed the Goodison helm continued with the signing of MK Dons defender/midfielder, Brendan Galloway, on a five-year contract in early August 2014. The defender was another promising young talent plucked from the lower divisions, this time from League One.

Galloway was optimistic about his move, telling the Everton website: "It means an awful lot to me coming to such a great club. I'm now looking forward to learning off some of the more senior players – the likes of Sylvain Distin and Phil Jagielka.

"Long-term, I also want to get in the Everton team and play week-in and week-out in the Premier League and play in a team that's doing well, which I know we will do."

He was born in Zimbabwe, and raised in Harare until he and his family moved to Britain. Despite his eligibility for the African country, Galloway featured at several youth levels for England, winning 3 caps at Under-19 level. Such was his promise, the youngster made his MK Dons debut before his 16th birthday, at just over 15 years and 6 months old, in a 6-0 win over Nantwich Town in the FA Cup first round in 2011.

He saw limited action in his first two seasons in Milton Keynes, but his final season there was something of a breakthrough campaign, with the centre-back making 13 appearances in all competitions and scoring one goal – against Halifax Town again in the FA Cup in November.

The fee for the player was to be decided by a tribunal, with Everton's offer of £400k plus add-ons rejected by his previous club. He settled in to playing for Everton Under-21s and eventually got a chance to show his mettle at senior level when Leighton Baines finally succumbed to surgery on a long-standing ankle injury late on in the 2014-15 season and then had to go under the knife again in August 2015 on the same ankle.

Galloway played in Everton's final two Premier League games of the 2014-15 campaign and was called upon to deputise for Baines for the first four months of the following season, acquitting himself with remarkable maturity that had many observers purring about another future England international refining his trade at Goodison Park.

He was rewarded in December 2015 with new deal that included an additional 1-year extension to his original contract, which was now set to expire in June 2020.

However, he played very little part in the second half of the 2015-16 season after picking up a knee injury that would keep him sidelined for more than two months. He returned in May, played for the Under-21s and featured in couple of pre-season games under new manager Ronald Koeman but the competition for places in the squad by that point meant that a loan elsewhere made more sense.

A season-long move to Premier League rivals West Bromwich Albion under the defensively-minded Tony Pulis appeared to offer Galloway the ideal opportunity to ramp up his development but he ended up making just three league starts for the Baggies. His year away from Everton ended up being an unproductive one but he would get another crack at getting regular first-team action at Sunderland.

Galloway joined the newly-relegated Black Cats on a season-long loan for the 2017-18 campaign, hoping to help them bounce straight back to the Premier League. But he played barely a handful of games as the Wearsiders fell to a new low, ultimately suffering relegation to League One.

He returned to Everton the following summer under the new management of Marco Silva who decided that he should work with David Unsworth and the Under-23s rather than the first team. He was not initially given a squad number, an indication that the end of his Everton career was in sight, with two years still left on his contract but he did not join the cull of fringe players in 2018 and was eventually given the No 36 shirt.

He would ply his trade alongside Tyias Browning in the U23s until a hamstring injury sidelined him in early October and eventually got back playing for the U23s until mid-February before he was released by the club in the summer of 2019 to join Luton Town.