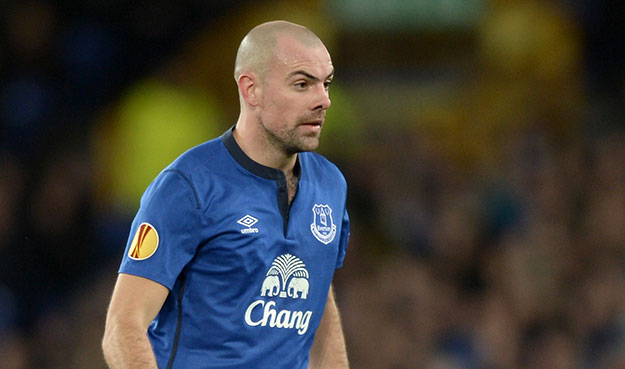 As a winter injury crisis bit deep into David Moyes squad in January 2012 and took out much of his central midfield and central defence, the Everton manager moved to sign Darron Gibson from Manchester United.

Having made just two League starts for the Champions that season, the Irishman was deemed surplus to requirements at Old Trafford and, with his contract expiring in June, the Blues were able to pick the midfielder up on the cheap, the only other interest coming from Sunderland. The fee was officially undisclosed but press reports pegged the figure at £500,000, potentially rising to £2M based on appearances.

A product of United's youth system, Gibson would make 50 appearances on loan at Royal Antwerp and Wolverhampton Wanderers before being handed his Premier League debut by Sir Alex Ferguson in November 2008.

He would make sporadic first-team appearances that season, mostly in cup competitions where he scored two FA Cup goals, made his Uefa Champions League debut against Villarreal and picked up a League Cup winner's medal after playing the first 90 minutes of the Final against Tottenham which United eventually won on penalties.

His first League goal came in last match of the 2008-09 season against Hull City and that helped him earn a three-year contract extension. He would remain on the fringes of the first team at Old Trafford for the next two seasons, though, despite netting Champions League goals against Bayern Munich and Shalke.

Having stirred controversy by electing to play for the Republic of Ireland over Northern Ireland where he was born, his international manager Giovanni Trappatoni advised him that in order to further his career he would have to move away from United.

That opportunity came when Everton came knocking and in a struggling team had had every opportunity to prove he could be a driving force in a Premier League midfield.  He went straight into the side for his Everton debut at Aston Villa, despite having played so few games, but acquitted himself reasonably well until he faded in the second half.

A succession of more quietly effective appearances followed as Gibson quickly established himself near the top of Moyes's automatic picks for team selection — and Everton remained unbeaten in seven games with him playing alongside Maroune Fellaini; Darron was credited as being the catalyst for a significant improvement in the Big Belgian's game. The run included one trademark blistering goal — against Premier League leaders and Champions elect, Manchester City.

That was until athletic pubalgia reared it's ugly head and laid him low for a month. But he came back to join in the surging run to Wembley, with a series of quietly effective displays at the core of central midfield that gave Everton an indefinable strength and resilience, manifested in his increasingly impressive unbeaten record that ended at Wembley when Everton tried to sit back on a fortuitous one-goal lead against Liverpool.

Gibson went on to consolidate his importance to Everton the following season, with solid displays in midfield that often seemed to bring out something more from Maroune Fellaini. But full fitness continued to be a challenge and the season was punctuated with two spells where he was out for a couple of months each with thigh injuries.

The persistent thigh problem related to a growth spur was something that David Moyes thought could be fixed with an operation that was, however, continually put off — the player's availability, even with limited fitness and compromised ability to strike the ball hard, was deemed too valuable to give up.

Gibson had more injury problems coming into his third season at Everton, and it was a couple of months in before he appeared as a second half sub at the Etihad in early October before yet another international break appeared to provide the opportunity for more recovery.  But he had decided to play for his country again, with the departure of Ireland manager Trappatoni, and played a full game against Germany.

All seemed fine in the next international, against Kazakhstan, when 38 minutes in he went in on a fairly innocuous challenge and ended up coming down rather heavily and blowing out his ACL. That put paid to the excellent partnership he looked like developing with James McCarthy and he would spend a year on sidelines recuperating.

After finally completing the long recovery from his knee injury, Gibson returned sporadically to the side in 2014-15, demonstrating how badly his vision and passing had been missed but a small fracture to the fifth metatarsal in his foot in early April 2015 prematurely ended the season for him and returned him to the treatment room.

Gibson's recovery was slow and he suffered a setback in his recovery early in the 2015-16 season which, combined perhaps with a hit-and-run drink-driving charge and stiff competition for places restricted his first-team opportunities.

By the January transfer window and with just six months left on his contract, Gibson was the subject of reports that Everton would be prepared to let him go out on loan for the remainder of the campaign to give him the best possible chance of making Ireland's squad for Euro 2016.

A move never materialised and it was assumed he would move on the following summer following the arrival of new manager Ronald Koeman but in June 2016 he was awarded a surprise two-year contract extension, believed to be the fulfillment of a pledge made to the player by outgoing boss Roberto Martinez.

“I am absolutely delighted,” Gibson said after concluding the deal. “I had a few options but as long as Everton were giving me the option I was never going anywhere else.

“Obviously, I have had a tough few years but thankfully the Club have stuck by me and I have signed for another two years, so hopefully the next two years go a lot better."

Gibson had, however, already made his last competitive start for the club. Despite figuring in pre-season, he made just one substitute's appearance in the League Cup under Koeman during the first half of the 2016-17 season and he was acquired by his former boss, Moyes, for Sunderland at the end of January 2017 in a double deal that included Bryan Oviedo. The fee was undisclosed but some sources cite a sum of £7.5m for the deal, with Gibson representing two-thirds of that total, at £5m.