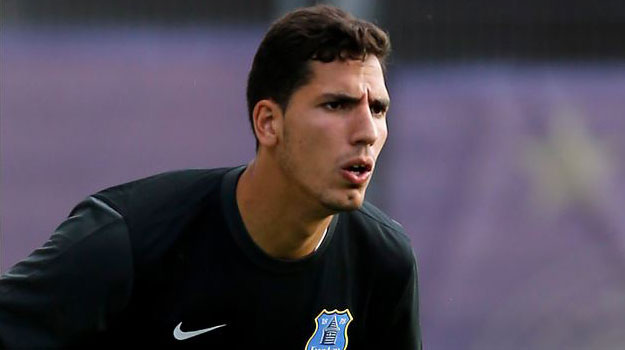 Potentially a significant signing made by Roberto Martinez in just his second week as the new Everton manager was to persuade Atletico Madrid to part company with promising goalkeeper Joel Robles.

The Spaniard had spent part of the previous season on loan with Martinez at Wigan Athletic and he eventually supplanted Ali Al-Habsi in the Latics' goal, playing a total of 8 senior games and going on to keep a clean sheet in the 2012-13 FA Cup Final win over Manchester City.

Martinez had seen enough in that brief loan spell to know that he wanted to bring him to Everton on a permanent basis once he had succeeded David Moyes on Merseyside.

At just 23 and signing on at Goodison for five years, Robles offered the potential to become the eventual replacement for Tim Howard who had held a vice grip on the first-choice goalkeeping slot ever since arriving from Manchester United on a permanent basis in 2007.

Robles was initially used in the cup competitions in his first season at the club, playing both of the Blues' Capital One cup ties and the four games in the FA Cup as Everton made it as far as the quarter finals before Arsenal eventually dumped them out wth a 4-1 win at the Emirates.

He displayed a little uncertainty in those early appearances, though, particularly on aerial balls where he displayed a propensity to punch even the most routine of crosses, but he seemed to settle later in the FA Cup run without showing sufficient evidence that he was ready to take over the starting role full time from Howard.

His opportunity came, however, with an injury to Tim Howard on Boxing Day 2014 and the young Spaniard stepped up, haltingly at first, until he regained his match-sharpness, eventually commanding his area with some authority and chalking up an impressive run of three consecutive clean sheets before Howard regained fitness and was automatically reinstated as Number 1 choice.

Martinez's decision was a controversial one, regarded as unfair on Robles, and sent an unfortunate message to him and the club's other fringe players, who would have to fight that much harder to secure a hold onto any chances that may come their way to play for the first team.  Robles returned to the bench for the rest of the season, with Russell Griffiths returning to the U21s as the Spaniard resumed his place as second string to the American.

That would continue to be Robles' lot in 2015-16, that despite mounting scrutiny of Howard's performances behind a defence that had become worryingly porous by the halfway stage of the campaign. He continued to press his claims for a regular starting role when opportunities arose in the Capital One Cup with a string of solid displays.

His luck under Martinez finally changed, however, when a combination of injury, further deterioration in form and the American's impending move to Colorado Rapids finally saw Howard replaced by Robles who was handed a run of games in the league in the spring of 2016.  He seemed a better alternative in many aspects and retained his place for the rest of the season until Howard was granted a couple of farewell appearances in the final two home games of the season.

Robles had performed competently but wasn't outstanding, leaving the incoming manager Ronald Koeman with a task to find a new first class goalkeeper who could provide the Spaniard competition for the first-choice spot between the posts at Everton. His first move was to bring in Maarten Stekelenburg, who showed reasonably well in pre-season games.

Stekelenburg started the season as first choice but Robles would displace him after the Goodison derby following a collision with Baines that injured his leg, and Robles ended up playing half of the league games in the season until a stupid error that gave away a needles penalty against Burnley lost him his place.

Neither goalkeeper could be considered the first-choice, however, and were displaced soon after Ronald Koeman secured the services of Jason Pickford early in the summer 2017 transfer window. This, along with the manager's preference for Stekelenburg, meant that Robles lost the No 1 shirt and saw no action in pre-season, with little bench time until October 2017, when the Dutchman suffered a groin injury. That allowed Robles to step back in as second in line, with a couple of appearances in by then meaningless Europa League games thrown in.

Joel remained the second-choice 'keeper for the remainder of the 2017-18 season but was unable to unseat Pickford who went on to be named Everton's Player of the Season. The Spaniard decided his time in England was up and that he should return to Spain when his contract expired in the summer of 2018 and he signed for Real Betis that July.