Stefan Wessels was perhaps the main surprise in the team selection, replacing Tim Howard who has still not fully recovered from his dislocated finger and who has, according to Alan Irvine, been receiving injections to allow him to play in recent games. Nuno Valente stood in for the injured Leighton Baines, James McFadden partnered Victor Anichebe, Phil Neville returned to central midfield, and Alan Stubbs was paired with Joleon Lescott. No Arteta, Hibbert or Yobo in the squad, but Gravesen (who was expected to start but didn't) and Vaughan (returning thankfully from long-term injury) and Cahill starting on the bench.  On the other side, one name of note: Don Hutchison.

Despite the strong line-up, Everton struggled to really make much impression especially in the first 45 minutes when they were edged by a more adventurous Luton Town. Indeed, the Blues were positively lethargic and didn't really threaten their lowly opponents until the closing stages of the half.

Things livened up in the second half, though. Osman forced the best from Dean Brill in the Luton goal on two occasions, Anichebe had an effort hacked off the line and James Vaughan, on as a substitute went close with a glancing header.

Everton improved further when first Chill and then Gravesen were introduced later in the half but they were still unable to penetrate the Luton Town goal and the tie went to into extra time.

Ten minutes into the added period, it was Cahill who spared Blue blushes with a good finish off a Gravesen corner that was flicked on by Jagielka(?) and that, plus a clearance off the Everton line in the closing stages, proved to be enough to get Everton through to the Quarter-Finals of the League Cup for the first time in twenty years! An all-Premier League hat awaits them in Saturday's draw.

Fresh from morale-boosting victories over Larissa and Derby County, Everton look to progress to the 5th Round of the League Cup for the first time under David Moyes's stewardship.

And this Hallowe'en showdown with Luton Town at Kenilworth Road is the reverse of last season's third round tie in the same competition when Everton thumped the Hatters 4-0 at Goodison Park, only to be beaten in the fourth round by Arsenal.

Moyes has shown a willingness to rotate his players somewhat so far this season as he seeks to lessen the impact of intermittent fixture congestion that occurs either side of the international breaks. This will be Everton's third game in the space of six days but, thankfully, the return to fitness of the likes of Tim Cahill, Thomas Gravesen and — imminently, we're led to believe — James Vaughan means that the manager has a greater pool from which to select his starting XI.

That makes predicting his team for the trip down the M1 a bit harder. James McFadden, who started up front against Larissa, might get the nod to partner one of Yakubu or Victor Anichebe if Moyes opts for a 4-4-2. Or, if he goes with the 4-1-4-1 strategy so successful in the last two outings, he could get to lead the line again as he did against Larissa.

At the back, Alan Stubbs could start against inferior opposition, with either Joleon Lescott moving to left back or Nuno Valente getting a rare runout in place of Leighton Baines who was withdrawn from the action at Pride Park on Sunday because of injury. 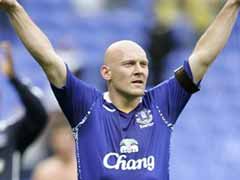 In midfield, Moyes has an abundance of options and may choose to hand Gravesen his first start of the campaign in order to build up match fitness.

Luton, for their part are chugging along in mid-table in League One but have of late been doing well on their own turf where they're unbeaten since being turned over by Bristol Rovers in early September.

This should, however, be a routine tie for Everton who will be hoping to go all the way and win the only major domestic competition to have eluded them so far since its inception in the 1960s.

Having won the last 2 matches, Everton travel to Luton Town to see if they can progress in the League Cup, the only major English trophy to elude them.

Our record at Luton Town:

The last time the clubs met was on 24 October last season, in the third round of the League Cup, and saw Everton progress to the Fourth round with a 4:0 win at Goodison Park, thanks to goals from Tim Cahill, James McFadden, Victor Anichebe and a Luton Town own goal.

All 3 of the previous League Cup encounters have been at Goodison Park.  The only cup encounter at Kenilworth Road was in the 1986 FA Cup, when Everton drew 2:2 in the Quarter Final, with the goals coming from Adrian Heath and another Luton Town own goal.  Everton went on to win the replay 2:1.

This will be Everton’s 19th match on 31 October:

Despite a poor record on this date, Everton have won both League Cup matches played previously on this date.  The first was Everton’s 2nd League Cup game ever, when they won 3:1 against Walsall at Goodison Park in 1960 with Everton’s goals coming from Bobby Collins, Keith Webber and Roy Vernon.
The other League Cup match on this date was in 1977 when goals from Mick Lyons and Jim Pearson secured a 2:1 win at Middlesbrough in a 3rd round replay.

Milestones that can be reached this game: