Everton stymied Chelsea's much-vaunted attack for the second time this season as they held the Champions League semi-finalists and their opponents in next month's FA Cup Final to a goalless draw at Stamford Bridge. After frustrating the Londoners at Goodison Park in December in a game that also finished 0-0, the Blues put a sizeable dent in Chelsea's title hopes this evening by blanking them again and though they survived a late scare when Didier Drogba was denied by the woodwork, David Moyes's side will probably be kicking themselves for not winning this one.

As expected, David Moyes made changes in each of the outfield areas of the pitch, resting the injured Marouane Fellaini entirely and dropping Phil Jagielka, Tony Hibbert and Louis Saha to the bench after the odyssey against Manchester United at Wembley. Joseph Yobo and Lars Jacobsen came into the defence, Jô returned to spearhead the attack and Segundo Castillo was perhaps a surprise inclusion alongside Phil Neville in central midfield.

While they struggled to put anything meaningful together during 120 minutes of football on Sunday, the Blues showed they were in purposeful mood early on, Jô heading the first chance of the game into Petr Cech's arms from Steven Pienaar's third-minute cross.

Then, at the end of a terrific Everton move in which Tim Cahill collected Neville's pass and threaded a perfectly-weighted ball ahead of the Brazilian's run, Jô was foiled by Cech as he tried to beat him with a low drive. A chance reminiscent of his recent goal against Wigan, but this time he couldn't sneak the ball under the advancing 'keeper's body and what turned out to be the Blues's best chance of the match went begging.

Chelsea were looking below par and were being restricted to long-range efforts and free kicks in their attempts to make a breakthrough at the other end. Michael Ballack headed one set-piece wide and curled another safely over, while Frank Lampard showed that his sights were off by despatching a drifting shot from 30 yards into the stands behind Tim Howard's goal.

The main threat continued to come from Everton and they had a decent penalty shout turned down when Alex tripped the excellent Leighton Baines as he tried to cut past him. A minute later, Cahill finished a nice counter-attack by collecting Jô's square ball, turning in one movement and firing goalwards but Cech parried his shot and collected at the second attempt.

And the Blues weren't done there. Just before the break, Jô found himself in another excellent position but he became the latest victim of an oil-slick surface when he slipped just as he was pulling the trigger and his shot sliced away from goal.

Everton picked up after half-time where they'd left off going into the interval and Cahill again tested the goalkeeper with a close-range header and Pienaar's cheeky shot following a short corner had Cech scampering across goal to cover as the ball whistled not far away from the angle of crossbar and post.

So far so good for Moyes's boys who had matched their hosts for possession by this stage and created all the best opportunities. Yobo had shrugged off his early jitters to form an almost impregnable partnership with Joleon Lescott in central defence, Baines was playing out of his skin at left back and Castillo, after resembling a headless chicken for the opening 20 minutes, suddenly found his feet and spent the rest of the match doing his best Claude Makalele impression.

As the second period progressed, though, the game opened up a bit more from Chelsea's pespective and they finally started exerting some of the pressure that Moyes must have been expecting.

John Terry prompted Howard into a sprawling save with a stirring effort from 30 yards, substitute Salomon Kalou headed Florent Malouda's cross narrowly over and saw another great chance deflect over off Lescott's head, while the home faithful screamed for a penalty on three separate occasions for accidental handballs that referee Mark Halsey rightly waved away.

Meanwhile, with Guus Hiddink's side meeting a solid white wall of resistance, Everton continued to threaten to spring a surprise away victory. Jô blazed over from 18 yards under pressure from Alex and, after Lescott's shot ricocheted across goal to Cahill, the Australian rattled a shot into the side-netting.

And with 5 minutes remaining of normal time, the Blues raced downfield on the counter and Cahill laid it off invitingly for Pienaar but although he set himself confidently enough, he flashed a left-footed shot the wrong side of the post when he should have done better.

Moyes made a couple of late changes when Jacobsen and Jô came out of separate challenges limping heavily. Jagielka and Saha came on for the last few minutes and Jack Rodwell also came on for Leon Osman in injury time.

Chelsea had been ratcheting up the pressure in the closing stages but Everton were throwing bodies and legs in front of everything they threw their way. It wasn't until two minutes into stoppage time that a clear-cut chance fell the home team's way and it was almost decisive. Drogba expertly turned Lescott to get a clear sight of goal but, thankfully, lashed a right-footed shot off the face of the crossbar and out to the far side and safety from Everton's point of view.

Overall, a decent performance by Everton and one that, with better finishing, might have yielded all three points and a first win over Chelsea this century — guess we'll have to wait until Wembley next month for that!

Yes, there was perhaps a case for putting Saha or James Vaughan on for the last 10 minutes to inject a bit more sharpness and fresher legs into the attack but a point and a clean sheet from Stamford Bridge is not to be sniffed at.

The result sets the Blues up nicely for the final five games where they will attempt to edge Aston Villa out of fifth place, and on this evidence few would bet against them.

Just days after the climactic events at Wembley Stadium where they booked a place in the FA Cup Final, Everton have to quickly come down from Cloud 9 and prepare for a particularly tricky away game at Stamford Bridge against their opponents at Wembley next month, Chelsea.

The Blues stayed in London after Sunday's triumph over Manchester United in the semi-final and they will hopefully be in relaxed but focused mood for a match that promises to be one of their toughest yet.

Guus Hiddink's rejuvenated charges are still in the running for three trophies and are themselves riding a wave of confidence having disposed of Liverpool in the Champions League last week and Arsenal in the FA Cup on Saturday. They will have taken heart from the 4-4 draw between those two teams in the Premier League last night as they look to put more pressure on United at the summit.

So David Moyes can expect little let up in intensity from the Londoners while he will be concerned with the state of his small squad and the effects on it from 120 gruelling minutes on an energy-sapping pitch at the weekend.

He will welcome Jô back who was cup-tied for the semi-final and had to watch from the stands and will be pleased that James Vaughan came through extra-time with no ill-effects after returning from a long injury lay-off. Add Louis Saha, who will be a few more days further on from the stomach virus that disrupted his cup preparations last week, and the manager finally has options in attack. Expect the Brazilian to start, with the other two kept as weapons for the second half.

With one eye on the visit of Manchester City to Goodison Park on Saturday and the other on Arsenal who, after that draw at Anfield, could be kept in the Blues' sights at 7 points with an Everton victory this evening, Moyes may be conflicted over whether or not to rest a couple of players. 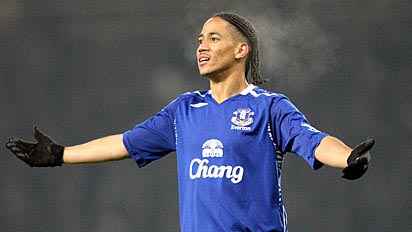 Joseph Yobo is fit and could come into central defence to give either Phil Jagielka or Joleon Lescott a break while in midfield he may also want to make changes, with Steven Pienaar flagging visibly in the extra half-hour at Wembley. Knowing Moyes, it wouldn't be all that surprising if he fielded his strongest XI to start with and perhaps looked to introduce players like Jack Rodwell and Dan Gosling in the second half, but he must be mindful of the fatigue levels of his players.

Chelsea will be without Joe Cole, Paolo Ferreira, Jose Boswinga and Deco but they have enough strength even without that quartet that Hiddink won't be fazed.

Moyes would no doubt be happy with a repeat of last year's result, a 1-1 draw secured by Tim Cahill's spectacular overhead kick in the dying minutes and that would be enough to elevate his team above Aston Villa and into 5th place on goal difference. Seeing as this a dress rehearsal of sorts for the Final next month, though, he'd love to get one over the Pensioners and beat them for the first time in his tenure as Everton boss.