Everton are in America once again, attempting to recreate the team bonding experience that presaged their best ever Premier League season (2004-05) while back home the club has been has been plunged into crisis by the stunning resignation of CEO Keith Wyness.

On the field, David Moyes has a limited pool of players to choose from that doesn't even come close to the new 18-man target required in next season's Premier League games but is is slowly increasing in size; however, no places for Yobo (returning from extended leave) or Cahill (approaching fitness).

For the Fire, Patrick Nyarko, cousin of former Blue Alex Nyarko, starts... while another former Blue, Brian McBride was signed by the home side today for their MLS campaign.

Inside the first minute, a great cross in from the home side forced Jagielka to head onto his own post!  A free-kick for Everton looked like a chance later on but Baines banged it into the wall.  Pienaar was lively going forward for the Blues, while Rodwell was again putting in another confident and impressive display in midfield.

On 40 mins, Yakubu got lose and went in on goal but was cut down for an obvious penalty... No! Play on.   And immediately in response, a good move with a dummy from Nyarko, Chris Rolfe slotted it home for the Fire to put Everton behind.

Baxter, with a poor tackle to upend John Torrington, was given a yellow card as Everton got rather tetchy with a string of homer decisions from the ref. 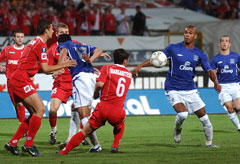 It was all change for the Fire — literally — after half-time, with every single Chicago player being rotated out with someone off the bench.  Kinda made Everton's one and only substitution, Osman on for the feisty Baxter, look rather pathetic

Vaughan came on after the hour, much to the joy of the assembled Evertonians. And he was soon in action, running through for Yakubu to steal the ball off his toe and take a shot. King burst through at the at the other end, cut down, no penalty.  Gosling then burst through on his own and then pull-back for Vaughan ended up only just going wide.

A good break and a shot on goal from Lowry was followed up by Frankowski who scored Chicago's second, just as Everton had been exerting some pressure.  Pienaar was cut down by Gutierrez and he picked up a yellow card.

Baines looked like he was through on goal but could not finish. Nice play from Osman won a free kick 20 yds out but Baines put it into the wall again and Lukas Jutkiewicz replaced Aiyegbeni Yakubu.  The third yellow went to Gosling for a rather laboured manhandling of

As Yobo came on for Pienaar, two Everton scallies decided to stage their own drunken pitch invasion that was cut short by security and will hopefully end up with them in jail.  Idiots.  A great free-kick from Gutierrez fizzed just wide.

Osman got a great ball in to Lescott but the ball just would not cross the line.  James Vaughan, aggressive as ever, went in far too hard on Daniel Woolard at the death, and was summarily dismissed.  Woolard needed a lot of treatment but struggled to his feet eventually as the rather fussy ref blew his whistle