Lars Jacobsen returned to the back line, allowing Phil Neville to move back into midfield, where Leon Osman returned for his 200th Everton appearance, a day before his 28th birthday, replacing Gosling.  Jô was dropped to the bench after another limited display last week and Saha was given the runout.

Saha had a shot after 10 mins but it was from too far out and screwed wide.  Pienaar then had a great shot after coming in nicely but it swerved just wide of the angle.  A nice move, Jacobsen crossing to Fellaini who set it up perfectly for Osman to score... but he made a horrible mess of his first-time volley.  He was having a bit of a mare to be honest, giving the ball away cheaply.  He got another chance getting past Kovaç well but firing straight at Green.

It was not all Everton though, by any means, with the Hammers looking up for it on the break. And Kovaç Hammered in a superb strike after 24 mins from fully 30 yards out, Howard well beaten.

Everton had been poor, and were subsequently paying the price, the goal giving West Ham confidence to come forward and show increasingly limited respect to the home side.

But Fellaini livened things up and set Cahill for a good run in, Cahill was tripped clearly by Tompkins for a penalty and the Ref immediately pulled out the red card — somewhat harsh!  Up stepped Louis Saha who fired it in left-footed, sending Green the wrong way to put the Blues back in the match and finally wake up the sleepy Goodison crowd.

Three minutes inside the second half, with two changes for the Hammers, Yobo controlled a lofted corner from Piennaar to the far post, where he controlled the ball well and just drilled it across goal where it spun off Upson's legs and into the net to give Everton the lead.  One for the Dubious Goals panel, methinks, after looking at the replay which shows Yobo's initial strike to be going wide.  On the next attack, a fabulous move, Saha put in a poor header that was deflected on to the bar and behind for a corner.

Much better stuff from Everton in the second half, attack after attack warming the Gwladys Street.  But there were a couple of worrying breaks from 10-man West Ham in which Howard was forced to stand firm to prevent a goal. But Saha finally sealed things with an excellently worked goal after Rodwell and Cahill combined to feed Pienaar who ghosted past Spector to the bye-line and then centered perfectly for a splendid tap-in by the Big Louis.

Saha should have got his hat-trick on 80 mins, a glorious set-up in acres f space and with plenty of time  but all he could do was shoot lamely at the advancing Green.  Rodwell then did well to cross for Cahill at the far post but his header was poor, into the ground, bouncing up onto the angle.

Saha and Cahill then went off to be replaced by Vaughan and Jô and the Blues played out match and provided a perfect backdrop for a fine celebration of the season, with the squad (including Phil Jagielka) doing a traditional lap of honour, and a fine send-off to the last match at Fulham... and the small matter of a Cup Final at Wembley in a fortnight.

Everton take to the field at Goodison Park for the last time this season hoping to recapture some winning form and gain some momentum ahead of the FA Cup Final at the end of the month.

There's also the matter of fifth place to play for, the position the Blues claimed at the end of last season, which is currently occupied by Aston Villa, albeit by a single point. Everton's superior goal difference means that if they better the Villans' points haul over the last two matches, they'll finish "best of the rest" for the second season running.

Martin O'Neill's side are at The Riverside Stadium this weekend and finish at home to Newcastle United on the final day meaning that they'll have a significant say in who gets relegated from the Premier League. 'Boro, three points adrift and with just one win in their last nine, are in all sorts of trouble and they'll either put up the fight of their lives or roll over and have their fate sealed.

Everton will probably need a favour from Middlesbrough and a win over West Ham this weekend because they certainly can't bank on getting the points they need at Craven Cottage next week — the Blues haven't won there since the 1950s and Fulham are in good form at home these days.

David Moyes hasn't seen his team win on home soil since early February, but he will be buouyed by the possible return to fitness of Tony Hibbert, Lars Jacobsen and Leo Osman. Hibbert has recovered from a neck injury, while Jacobsen and Osman were only deemed fit enough to start on the bench last week against Spurs. 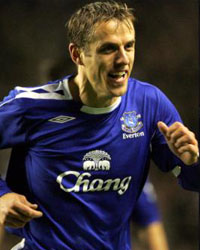 Phil Neville: Likely to return to the midfield

Hibbert would likely be Moyes's preferred starter at right back if he is fit but if he isn't, Jacobsen will get the nod and that would allow Phil Neville to move back into midfield. Osman could also return to the starting line-up at the expense of Dan Gosling; otherwise, the Blues are likely to be unchanged.

The Hammers welcome back Carlton Cole but wil still be without Kieron Dyer, Scott Parker and James Collins.