Four-month-old Ethan Holman was selected by Umbro to preview the design for Everton's 2015-16 home strip ahead of the full unveiling tomorrow.

As part of the "Born" marketing hook and associated #bornEFC hashtag, the kit manufacturer began a search for an infant Evertonian to help launch the club's new outfit and Mark Holman was the lucky dad to have his baby Blue chosen. 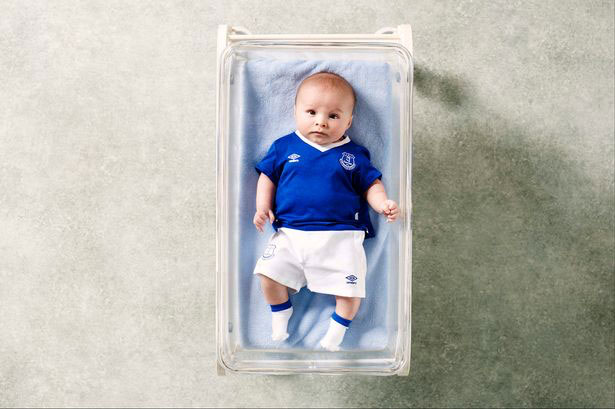 The kit appears matches one of the leaked photos of an adult jersey featuring thick white trim around a v-neck collar as the only embellishments to an otherwise blue shirt, very reminiscent of the strip worn by the 1957-1962 sides.

It also appears to mark a return to white socks after this season's navy blue effort that harked back to the 1920s.

Fingers crossed that we donÂ’t see a pic in twelve years time say of Ethan sporting the latest rs kit as he nips into Mwood to sign junior forms.

Still, at least you can get a new iPhone as well.

Also, being very traditional - is this yet another sign of EvertonÂ’s Â’small clubÂ’ mentality? IÂ’ve seen some leaked pictures of Arsenal and Man UtdÂ’s kits, and if theyÂ’re for real, they look almost futuristic, ala Bayern Munich et al. Their kits always make their players look fitter, faster, more modern - Everton always seem to go for the softly-softly look.

My other half has often commented on it (she pays more attention to such things than me!) and said things like, "Everton players never look as good as other teams". They way we look matters, clearly.

Generally, fitted rather than baggy looks better on an athlete. So, as Everton examples, the old Puma kit of 2000-2002 did nobody any favours whilst the first Nike one of 2012-13 helped improve the form of the players. However, size choice is also important and Baines and Stones wear their shorts too tight perhaps. Take a look at photos or next time you see us on the telly.

Personally I think black boots make players legs look shorter and white or bright boots give an impression of lengthened legs and therefore a sleeker form. I also prefer white socks for this reason, although the very dark ones of this season were not a bad alternative as they avoided white tops or hoops that immediately create an illusion of a shorter leg (think 1986-89 Umbro kit).

Although I prefer white socks, just sticking them with this seasonÂ’s shirt would be wrong as thereÂ’s no white trim on the shirt and it would look imbalanced. The new kit looks well balanced, but cut will be all important to the end look and white boots ( eg OsmanÂ’s choice latterly ) will look way better than black ( eg HibbertÂ’s usual choice ).

However, IÂ’m almost certain I have the kit (just revealed) laying at home with Fellaini on the back? Looks very familiar.