Atsu signs off as his Goodison loan ends 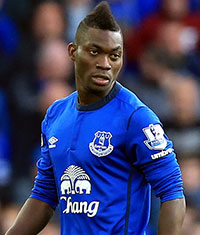 Christian Atsu bade Evertonians farewell over Twitter today as he returns to parent club Chelsea, most likely for another loan spell elsewhere after a disappointing season with the Blues.

The 23-year-old Ghanaian arrived on loan last August having starred in the World Cup for his country, ostensibly to fill the role occupied the previous year by Gerard Deulofeu.

He was unable to emulate the mercurial Spaniard's impact at Everton, however, as he initially struggled to make the step up from his spell in the Dutch Eredivisie with Vitesse Arnhem to the faster, more physical environs of the Premier League.

A hamstring injury, his headline-grabbing involvement in the Africa Cup of Nations (where he was named player of the tournament and awarded goal of the tournament), and a bout of illness this year all contributed to his reduced opportunities to break into Roberto Martinez's first team.

The winger, who made just eight appearances in all competitions for the Blues, is already being linked with a season-long loan at newly-promoted Bournemouth with whom he has reportedly held talks today.

I would like to take this opportunity to thank everyone at Everton for making me feel welcome during my time there this season. The fans, the staff, my teammates have all been very supportive.

I'm sorry that things didn't work out for me but I must look forward and am keen to take the next step in my football career. God bless everyone.

He won all the awards after the AfCon cup: Player of the Tournament; Goal of the Competition, etc

Deserves to be treated better, best of luck my fellow African!

Andy Mack
4 Posted 27/05/2015 at 17:34:29
He was pretty fab in all the games I watched at the AFCON, was so looking forward to seeing him play, yet minimal impact for us. Least he had the sense not moan to the reporters, maybe just another league or a bit more time needed for him. Good luck Mr Atsu.
Harold Matthews
9 Posted 27/05/2015 at 17:51:56
I thought Atsu was a decent player who tried to play with intelligence but playing 1-2s with Coleman, Naismith and Lukaku would make anyone look bad,........and that includes Messi.
Dave Abrahams
10 Posted 27/05/2015 at 18:20:38
Still donÂ’t know if the lad was good or bad, he certainly never got a proper run of games to let us make our minds up. It seemed a very strange loan deal when the lad was never going to play for a few weeks during the African Nations cup, I wonder how much this loan deal cost.
Geoffrey Risebrow
11 Posted 27/05/2015 at 18:17:52
Good luck, Christian. I am not going to judge a player who I have barely seen play. When Roberto was playing Ross on the left hand side, it makes you wonder why Atsu wasnÂ’t given more chances? Another total waste of a loan by our manager. Roberto just isnÂ’t good enough for the level of Everton!
Eugene Ruane
12 Posted 27/05/2015 at 18:37:15
Good luck Mr Atsu.

You didnÂ’t look great for us but hardly got what could be considered a run in the side and you did look great in the cup of nations (player and goal of the tournament).

All the best lad.

Fair play, he hasnÂ’t complained or had a crack at us. It didnÂ’t work out but good luck to him for the future.

The lad went to the African Cup and won Player of the Tournament. Martinez lays on all the flannel about what an impact he was going to have in the 2nd half of the season and then zilch, nowt, nada, sweet FA.

Christ we are in the shit with Martinez at the helm next season. He sadly is not upto the job but, hey ho, not bad for plucky little Everton.

Mark Pierpoint
28 Posted 29/05/2015 at 17:51:24
Signed for Bournemouth. Odd I think. Not the sort of player for a relegation battle. Wonder if Eddie Howe is going to be another Â’philosophyÂ’ lead manager who will take them down without a fight but some nice football
Patrick Murphy
29 Posted 29/05/2015 at 18:01:08
Mark - I donÂ’t believe that Bournemouth will be involved in a relegation battle if they keep their core players and add new ones. If Distin joins Atsu down South and they have a better start to the season than Everton the knives will be out for our philosophising manager.

James Hughes
30 Posted 30/05/2015 at 10:44:21
Atsu has signed a loan deal for Bournemouth, maybe he will get game time there and we will get a better opinion of him.
Did we pay his wages whilst he was here?Just asking as he seems to be another player Jose doesnÂ’t rate. Roberto should offer Chelski 㿀M for him.
After the Traore farce and Alcaraz (stop now), I am eagerly awaiting our next foray into the transfer market.