Ignominious defeat from the Jaws of Victory 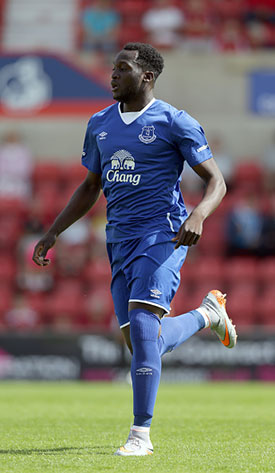 John Stones coming in for Gareth Barry was Everton's one change for the visit of West Ham United this afternoon.

Bryan Oviedo has recovered from the knock he sustained against Aston Villa on Tuesday and starts. Baines, Deulofeu and Niasse start on the benchj with Tom Cleverley still suffering from a chest infection.

West Ham kicked off but Everton got possession despite and mounted the first attack despite a poor pass from Barkley, Mirallas's cross headed away. A ball flicked over the top saw Lukaku battling well and challenging Adrian. Some smart football led to a corner off Coleman's cross, delivered well by Barkley and it came out to McCarthy who lashed in a brilliant shot that almost caught out Adrian, with Stones being wrestled to the ground by Oxford, for a clear penalty -- not given.

But Everton gave West Ham a lot of room to advance and Payet lashed a shot that grazed the outside of the post.

Everton went ahead after a nice play down the left and an inviting ball from Oviedo that Lukaku touched on well as he advanced and fired past Adrian, in off the far post, a very well taken goal by the big man. Mirallas was rather unfairly booked for diving.

Lukaku and Lennon exchanged passes on right but the cross didn't come for Lukaku. Everton won a couple more corners that threatened, Barkley volleying a looping clearance back at Adrian's near post, forcing a smart stop.

West Ham seemed to have plenty of space when they advanced with the ball but were not getting effective possession into the Everton area, but Coleman did give a free-kick away wide right that looked very dangerous and won a Hammers corner, Ogbonna looking for a penalty as Funes Mori tried to restrain his run.

Lukaku fired in but straight at Adrian, who spilled it briefly. Mirallas made a clumsy challenge on Creswell and a strong West Ham protest earned him a second yellow, putting Everton in a very precarious position with 10 minutes still to play before half-time.

As tempers flared, Antonio was booked for a late tackle on Barkley. Everton tried to advance with neat passing but left themselves outnumbered with slow build-up play and West Ham were allowed to attack,Antonia going on late on Robles but not seeing a second yellow.

Emenike looked set to score off a superb cross in from Cresswell but Robles somehow saved it with his legs. Everton moved the ball forward well enough but the conviction was lacking and a lose ball from Lukaku ended the forward play, and saw Jagielka foul Payet in a very dangerous area, Payet looping it over the Everton bar. Everton held on to their lead at the break.

Besic replaced Stones after the break, while Bilic took defender Oxford off and replaced him with Andy Carroll. Besic was a liitle too strong and gave away a needless free-kick that Antonio almost converted. At the other end, McCarthy's drive won a corner that was wasted.

The 10 men of Everton went further ahead with a lovely worked goal that was all down to tremendous determination and skill from Lennon who exchanged passes with Lukaku before finishing with a lovely touch past a startled Adrian.

Slaven Bilic, his game plan in tatters, reacted by bringing on Sako and Song but it had little effect. Besic did well to earn a penalty that was lazily, pathetically executed by Lukaku, easily saved by Adrian, a horrible and possibly costly waste.

Lukaku then became provider but his cross was horribly overhit as Everton seemed determined to let West Ham back into this game from an incredibly strong winning position. Lukaku had another chance, running in between the centre-backs and flicking it past Adrian, expect for the interception of Adrian's extended foot to deny him.

Oumar Niasse was given 15 minutes, replacing the excellent Aaron Lennon. Robles was booked for dissent. (Why?) West Ham made the predictable breakthrough after yet another corner, Antonio heading in a good cross amongst a host of defenders.

Ogbonna was booked for tripping Niasse and Barkley fired a poor effort straight at Adrian. West ham attacked again, and Sako was there to glance in the header off Payet's superb delivery, stunning the Blues, who should have had this game sown up despite being a man down.

Besic had a shot that hit a defender but no penalty. Lukaku had a chance to run in again but hiss awful first touch stopped him cold. At the other end, Sako was thwarted by Robles. A great cross by Oviedo went past most, eaarning a couple of corners, the second one far too deep. Barkley seemed to have time to make space and shoot but his touch let him down.

With a minute left, Lukaku was replaced by Gareth Barry, a strange decision of you want to win the game? Or perhaps not given Lukaku's profligacy. And it was inevitable that Payet was there to finish a knock-down from Sako, a ball that Robles should ave fallen on, astounding nonsense from the Blues.