Junior on the road to redemption 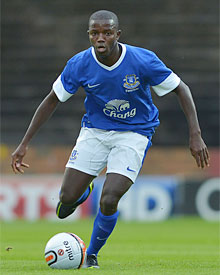 Francisco Junior has opened up on social media about how he almost let drink and partying wreck his career and his belief that he is now focused again on trying to make it at the top level.

Signed from Manchester City's reserve set-up as a promising midfield prospect, the former Benfica academy graduate has been with Everton since 2012 but remains a largely forgotten figure, as far away from first-team contention as ever.

In that time he has just one senior appearance to his name, a 45-minute showing at Leeds United as one of half a dozen young players thrown into an ill-fated League Cup tie in David Moyes's final season with the club.

He has been farmed out on loan to Port Vale, Vitesse Arnhem and Stromsgodset while opportunities to push for a place in the first team under Roberto Martinez, like the dead rubber against Krasnodar last December and this summer's pre-season trip to Singapore, have passed him by.

As David Prentice uncovers in the Liverpool Echo, the 23-year-old has admitted to plenty of reasons for why on his Instagram account, not least the loss in 2012 of his last guiding force in the form of his mother and the distracting influence of people he mistakenly believed were his friends.

“Sometimes is always better later than never," the Guinea-Bissau-born player wrote in occasionally broken English. "After I lost my mum three years ago I lost my world. I been nearly nine years now living alone with no family and zero support off no-one.

“I stop be profisonal (sic), (party, sleep later, alcohol) because I always think talent is enough. But I was wrong. And that people I call friends now they talk shit about me in my back because am not that person any more and sold history about me."

Junior has a season remaining on his current contract and has the coming year to get himself back in shape and focused enough to persuade Martinez that he has a future with Everton.

If not, the former Portuguese U21 international is hopeful of doing enough to persuade another club to give a chance to finally make it.

“But just to let you guys know," he concluded, "am gona (sic) make it for sure. Can be here [at Everton] or somewhere else. thank god for always be there for me and my family and Nojan."

I hope he gets his life in order and he turns it all around. Only person that can do that is himself. Be great if he can do that at Everton but if not then hopefully he can make a start now and play regularly at another club. Hate to see talent go to waste.

Malc Kitchen
4 Posted 20/07/2015 at 18:16:02
Yeah Jim it is! I saw Junior play 2 years ago and he looked good. Sincerely hope he makes it. Meanwhile perhaps ask Jags for a hug or Tim Howard! :)
Arild Andersen
5 Posted 20/07/2015 at 18:12:21
I saw him a couple of times when he played for StrÃƒÂ¸msgodset. He was very disappointing, but if his personal life was troubled, that could of course be the reason. Had one of the misses of the season as well, Jelavic vs Southampton-style, but with no pressure from defenders.

He never stood out in the Norwegian league, and wasn't even half the player Stefan Johansen was (Johansen, now at Celtic,was StrÃƒÂ¸msgodset's best player the season before Junior played there), so I doubt that he ever will be good enough for the Premier League, but I wish him all the best.
Steve Guy
6 Posted 20/07/2015 at 19:41:07
I was at that goddamn awful Leeds game. The whole team stank the place out and this lad was one of them, hauled off having given the ball away every time he was in possession or getting knocked off the ball too easily. Then again he is small and slightly built. He made Ossie look like a heavyweight.

I hope he can resurrect his career and it's a great start to come out in this way; self realisation is the start of his way back......I just don't think he will be with us after his contract runs out.

Bill Griffiths
7 Posted 20/07/2015 at 20:57:50
I saw him play at Wrexham the other week, coming on to play the last half hour. He played very well and looked an extremely skilful player. As someone else has pointed out his main weakness is probably being a bit lightweight.
Harold Matthews
8 Posted 20/07/2015 at 21:55:30
Yes Steve, I also remember that Leeds game where Fellaini, Gueye and Junior kept tripping over the ball and Anichebe was pulled down every time he got within shooting distance.

Anyway, despite the defeat, My sons and I came away with much cheer because we had discovered a star. A lad who came on and dazzled on the left side. Went on a long twisting run after cutting inside and would have been in on goal if some one had returned his quick 1-2 pass. His name? Bryan Oviedo.

When asked to comment on his performance, our managerial team shrugged shoulders and grunted. Needless to say, it took Oviedo quite a while to make his mark.

As for Junior. Very skilful little player and I liked his honest interview. Hopefully he will find himself a decent career.

Mike Gaynes
9 Posted 21/07/2015 at 00:34:04
Harold, I was an Oviedo fan even before he joined us... watched him rip through the USA as a youngster... and I'm still hoping he stays healthy long enough to become a regular for us -- and surpass his glorious high point at OT. What a moment that was.

Regarding Junior... I salute his courage in going public and accepting responsibility for his actions. That's a big step towards maturity right there. All the best to the young man.

You would have to guess that won't be at Everton and would likely involve stepping down a level first. Plenty of good players don't make it in the league with their best efforts, so a lad who acknowledges that he's spent a fair bit of time on the piss would be a massive long shot.