City prove too much for Martinez's Everton 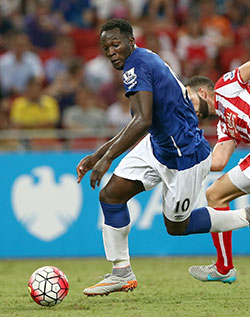 Romelu Lukaku had a goal disallowed and saw a free kick clip the bar in the first half
Manchester City kept up their 100% start to the new season with a 2-0 victory at Goodison Park thanks to second-half goals by Aleksandar Kolarov and Samir Nasri.

Roberto Martinez named an unchanged line-up from the team that had demolished Southampton last weekend but his side largely lacked the intensity that had characterised that display on the south coast.

Instead, it was Manuel Pellegrini's men who posted their intentions early on when Sergio Aguero forced two early saves from Tim Howard, before David SIlva tried his luck from the edge of the box, only to shoot straight at the goalkeeper.

At the other end, Ross Barkley had Everton's only shot on target in the first half but Joe Hart did well to parry his fierce drive while Romelu Lukaku had a goal disallowed for offside and Seamus Coleman narrowly missed with a left-footed effort at the end of a good run.

City remained the more organised and penetrative of the two teams and Yaya Toure flashed a ball across the box that just eluded Raheem Sterling while Phil Jagielka headed narrowly over and Lukaku clipped the bar with a free kick on the stroke of half time.

Everton's forward momentum dissipated in the second half, though, where City established greater control of proceedings and took the lead on the hour mark. Kolarov was played in on the overlap by Sterling and he fired inside Howard's near post to make it 1-0.

The American did better three minutes later to deny Jesus Navas from the angle and was on hand to parry away a similar effort from the Spanish winger late on. But after Gareth Barry's header had been cleared away from the goal line by the City defence, the visitors sealed the game two minutes from time.

Nasri anticipated an impressive flicked ball by Toure that put him behind the Everton defence and he knocked it over Howard to seal the points.

After the game, Martinez felt his side unfortunate not to have got something from the game.

"It's a little bit hard to take because I think we had very good moments," he told BBC Sport. "If we had got the first goal it would have changed the game. Overall I felt we didn't have that bit of luck you need in the six-yard box."