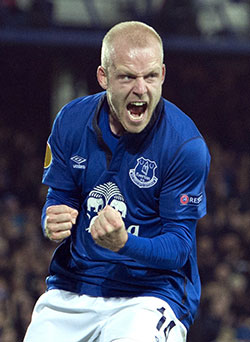 Steven Naismith came off the bench to score a phenomenal hat-trick as Everton responded to an electrifying atmosphere at Goodison Park to condemn Chelsea to another defeat.

The Scot was introduced as an early substitute following an injury to Muhamed Besic and scored two goals in five minutes to stun the Champions and put the Blues into a commanding lead midway through the first half.

Nemanja Matic halved the Londoners' deficit nine minutes before half-time with a terrific long-range strike but Everton held firm in the second half and killed the game with eight minutes remaining when Naismith fired home his third goal from a tight angle.

Roberto Martinez had opted for an unorthodox formation featuring three nominal central defensive midfielders behind a forward three consisting of Romelu Lukaku, Arouna Kone and Ross Barkley but was forced to change his plans after just eight minutes when it was clear that Besic was unable to continue with a suspected hamstring injury.

Naismith was introduced in his stead and Barkley dropped deeper, allowing the Scot to be on hand in the 17th minute to meet Brendan Galloway's pin-point cross with a deft header past the stranded Asmir Begovic.

The Chelsea 'keeper then denied Arouna Kone with an excellent one-handed save but could do nothing to prevent Naismith from doubling the Toffees' advantage with a crisp left-footed strike that found the far corner from 25 yards out.

Rattled but unbowed, Mourinho's side gradually established a grip on the game for much of the remainder of the half but they found Everton's back four, with Gareth Barry and James McCarthy uncompromising in front of them, to be impenetrable barrier that restricted them to a flurry of corners.

It would take something out of the top drawer to get past them and Matic delivered, profiting from plenty of space from around 30 yards out to unleash an unerring shot that gave Howard no chance.

That goal set up a second-half fightback from Chelsea but it was one that was never allowed to fully manifest itself thanks to resolute defending by Roberto Martinez's men, even when Seamus Coleman became the second injury casualty of the afternoon and had to come off with 13 minutes to go.

New signing Ramiro Funes Mori came on in his place to partner Phil Jagielka while the impressive John Stones, who seemed to relish playing the team he might have joined this summer had Everton not dug their heels in, moved to right back.

And the young England defender was involved in the build-up for the Blues' third goal which ended with Barkley slipping Naismith in to finish with aplomb to cap a fine display by the home side.