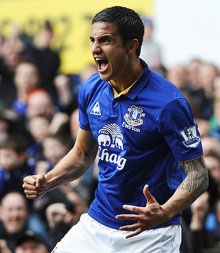 Tim Cahill says that Everton are approaching a different level now that Roberto Martinez's patience is starting to pay off, particularly with young players like Ross Barkley.

The Australian hero spent eight years with Everton and enjoyed the peak of the club's achievements since the turn of the century – the fourth-place finish and close brush with Champions League qualification in 2005, the semi-final of the League Cup in 2008 and the FA Cup Final in 2009.

Still an avid Blue, Cahill watches Everton matches from China where he is currently playing his football for Shanghai Shenhua and he expressed to the Liverpool Echo how impressed he is with Martinez's evolving side.

The 35-year-old feels that the Catalan's plan is starting to come together and even if he thinks there is scope to add a bit more steel in the middle of the park like when he was plying his trade at Goodison Park, he can see Martinez's vision.

"I’m always watching Everton," he said. "I had a great time there but the football that they play is on a different level now – the way they keep the ball, the way they spray it round and also how patient they are.

“It seems like some games they can play so much great football and it can frustrate you at times as well because you are waiting for that biting tackle or that changing moment that we had back in the day.

“You had players that could mix it up and when you play with players like that maybe that’s what they’re lacking. But overall, will you sacrifice that for a trophy in the cup that’s coming up? Most probably because it’s starting to really gel.

“Martinez has been patient. Obviously he’s had to wait to use players – the likes of Ross Barkley. I played with Ross when he was coming through and he was one of the best young players that I’ve ever played with.

“When you keep players like that, and you give them confidence and you let them play and let them shine, obviously it comes through – and keeping Stones too."

Roberto, give him a ring, bring him home and get him on the back room staff as soon as you can.

What wouldn't we give to have some of the steel of Cahill in his prime.

Have you forgotten all those last-ditch tackles in our own box and the ball being pumped up the pitch for some poor soul to chase down? The styles of Cahill's era and the present one are chalk and cheese. Will the 'new' style prove any more successful? I don't know the answer... but hopefully it will.

One thing I do know is, that without the support of the fans, it will be an uphill struggle for the team to achieve anything. If people are so bored with our style and are so adamant that the RM way is doomed to failure, perhaps they should consider not attending games to show how much they dislike it.

But I would imagine if we manage to overcome Man City and make it to Wembley, many of those truly disgruntled fans will be flooding the site with requests for tickets for the big match.

Mark Andersson
5 Posted 03/12/2015 at 04:42:00
Good post, Patrick. Although I'm not overly confident of Roberto and his brand of football, having the younger players coming through is rather exciting when it works.

Once the team gels for the full 90 minutes then, on their day, they can beat anyone &#!50; including City... and especially Liverpool.