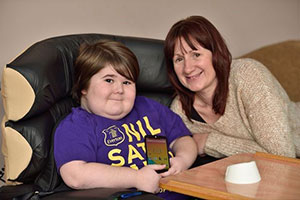 Noah Cunningham is set for a birthday to remember when Everton take on Dagenham & Redbridge in the FA Cup 3rd Round at Goodison Park on Saturday.

Noah, who turns 12 on Saturday, lives with Duchenne muscular dystrophy which means he is unable to walk and uses a wheelchair.

Noah and his mother Vicki quickly realised the power of the Everton family when fellow supporters got behind a campaign to make the young fanÆs day extra special by simply delivering him a card for his birthday.

Supporters who wish to hand a birthday card to Noah can drop them off at Park End Reception at Goodison Park which is open 8am-6pm Monday to Friday and from 9am on matchday.

Those fans who canÆt make the game but would like to wish Noah a happy birthday can post their cards to Everton Football Club, Goodison Park, L4 4EL and address the card to Noah.

The Club will ensure all cards are collected and given to Noah on the day of the fixture.

Hello all Everton fans especially those ones in the park end. There is a young man who goes by the name of Noah Cunningham who sits in space 11 at the front in his chair. He is a devoted Everton fan and is there in his chair come hail rain or shine to support Everton He has Duchenne muscular Dystrophy which is a muscle waisting disease.

Noah has his 12 BIRTHDAY on sat at the dagenham and redbridge game and his family are hoping that our fans could take the time to pass him a birthday card and wish him Happy birthday. It is a simple thing to do that will make a brave young mans BIRTHDAY even better after we all make him feel very very special.

This is mostly directed at the fans in the park end who I believe already know of Noah . Once again Noah is in space 11 in the park end obviously right at the front and he has a life limiting illness and every BIRTHDAY that his family spend with him is a Bonus, his family tell me. Noah's mum has asked me to post this so us fans can make a big fuss of him and pass him cards or just wish this young Everton blue nose a Happy birthday COYBB. Could every one repost this plz. Thank you.

This is a message from Speedo Mick. Your help would be very appreciated

"It should be a cracker and I can't wait to hear it.

"We will be on the tele so let's give it some wallop, ay.

"Sing your hearts out Blues and let's give our Noah a happy birthday he will never ever forget.

I'll echo the greetings from Paul, in neighbouring New Zealand, on behalf of all Australian Blues fans. You have a great day Noah and many more.