Martinez incensed as Everton are denied victory in controversial circumstances 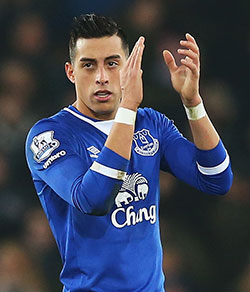 Everton were denied a thrilling victory at Stamford Bridge in bitterly controversial circumstances as John Terry was allowed to flick home Oscar's knock-on in the eighth minute of stoppage time despite being a yard offside.

The Toffees had retaken the lead through Ramiro Funes Mori's 90th-minute goal having earlier given up a 2-0 advantage by conceding two goals in as many minutes and were seconds away from their first win on Chelsea's turf in 22 years when Terry struck. Everton were incensed by the fact that referee Mike Jones had allowed the match to run a minute longer than the seven indicated by fourth official, Craig Pawson, and their of injustice was multiplied by the decision to allow the goal.

Roberto Martinez had opted for a balance between defence and attack for the visit to the home of the struggling Champions, with Kevin Mirallas playing off Romelu Lukaku up front, Aaron Lennon deployed wide on the right and Bryan Oviedo deputising for Seamus Coleman as a makeshift right back.

Fresh from morale-boosting results against Manchester City in the Capital One Cup and the Premier League and a win over Dagenham & Redbridge in the FA Cup, Everton more than matched Chelsea in the first half and could have gone into half time a goal up were it not for a smart save by Thibailt Courtois who pushed away Mirallas's powerful shot following a wonderful spin off his marker in the 40th minute.

Earlier, Oviedo had side-footed disappointingly wide while Guus Hiddink's Chelsea had forced a good save from Tim Howard when Willian's shot from the angle was diverted over the bar by the American with a quarter of an hour gone.

The match came alive after what had been a fairly ordinary first period when Everton forced home the opener five minutes after the interval. Leighton Baines's cross was destined for Romelu Lukaku to tap in from close range but Terry knocked it into his own net instead.

Baines was the provider again six minutes later after Ross Barkley had hammered a shot off the post when he sent another dangerous delivery into Chelsea's area where Mirallas controlled, spun and lashed past Courtois to put the Blues into a commanding position.

Unfortunately, the momentum they had built evaporated just eight minutes later when Cesc Fabregas's raking pass over the top caught Phil Jagielka on his heels and as he was out-muscled by Diego Costa, Howard rushed off out of his area, missed the ball completely and left the Spanish international an empty net with which to halve Chelsea's deficit.

Less than two minutes had elapsed by the time the home side levelled the match in horriby familiar circumstances for an Everton side that has made a habit of giving up leads this season. Patient possession down Everton's right flank ended with Costa flicking the ball inside for Fabregas and he benefited from a heavy deflection that carried his shot past Howard to make it 2-2.

Costa could have turned the game completely on its head in the 75th minute but mis-kicked Cesar Azpilicueta's cross in front of goal while Mirallas had a gilt-edged chance of his own to restore the Blues' lead when he was put into the clear but the Belgian, normally so clinical in one-on-one situations, fired straight at the goalkeeper.

But it was Everton who looked to have won it in dramatic fashion when Gerard Deulofeu, on for Aaron Lennon as part of a double substitution, collected a clearance from his own corner and whipped a delicious, arcing cross to the back post where Funes Mori knocked it past Courtois before tearing off to get swallowed up by the elated travelling fans in the corner.

There was late and infuriating drama to come for Martinez's men as referee Jones inexplicably padded stoppage time and Terry profited from awful officiating to heel the loose ball off Howard and into the net from a clearly offside position.

The result, Everton's 11th draw in 22 matches, leaves the Toffees mired in the bottom half of the table, 10 points off the coveted fourth spot in the Premier League and eight shy of fifth but with back-to-back home games to come before they travel again to Stoke on 6th February.